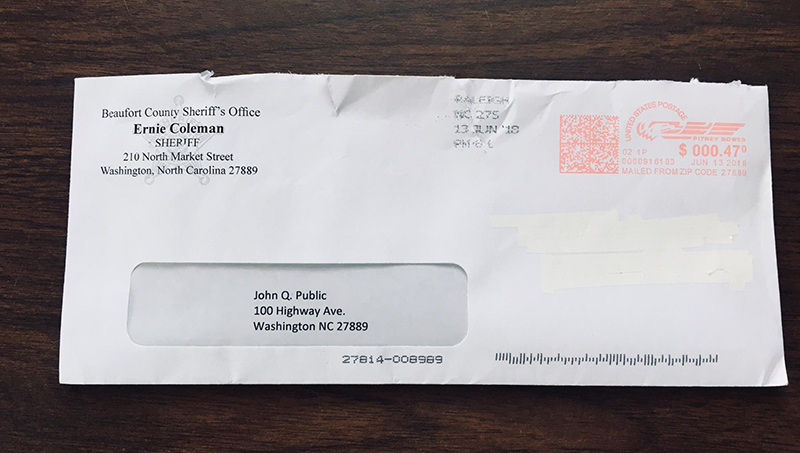 It’s the greatest calling one can serve outside of military service. It’s a duty as an American citizen. It’s also against state law to simply not show up when summoned to fulfill that duty.

Last week, more than two dozen county residents were served “show cause” orders by Beaufort County Sheriff’s Office deputies after they did not respond to summons to jury duty in Superior Court. Now, they’ll get their own day in court to explain to a judge their reasons why, according to Beaufort County Clerk of Court Marty Paramore.

“We called the roll and we had 27 people who did not report, were not excused, and what that results in is 27 show cause orders delivered by deputies to those individuals. At least, the deputy will attempt to serve those show cause orders,” Paramore said.

There are many reasons why people don’t appear for jury duty: sometimes they’ve moved and the summons goes to an old address; some people believe they don’t have to serve; others throw the letter out unopened.

“You’ll hear some people say, ‘I got the letter, and I thought it was campaign letter. I didn’t know it was an official summons to court, and I just threw it in the trash can,’” Paramore said. “They need to be careful and look at their mail and make sure they’re not throwing this letter away.”

The show cause orders issued last week requires the 27 people to appear in court on July 23 to tell the judge their reasons why they didn’t show up on June 11, the start of the last Superior Court trial session. If a juror has a valid excuse, the judge likely will rescheduled their jury duty for another date.

“If it’s not a valid excuse, he will impose a $50 fine and then set another date. You cannot just pay $50 and get out of it,” Paramore said.

Paramore said being employed and missing work is generally not a valid excuse, as roughly half to three-quarters of any given jury is missing work in order to fulfill their civic duty. However, there are exceptions if being away from work will cause excessive hardship — for example, a farmer called for jury duty in the middle of harvest season would likely be rescheduled for another date.

Paramore made it clear that, with very few exceptions, no one is exempt from jury duty. He said since he’s been Clerk of Court, both he and District Attorney Seth Edwards have served on juries. The requirements to serve are: a juror must be 18 years old, live in Beaufort County, speak English, cannot have been declared incompetent or have a recent felony conviction in which rights have not been restored. For those over the age of 72, jury duty is optional, which is based on a state mandate requiring judges to retire at that age and a courtesy option issued by the local court to older potential jurors, Paramore said.

Paramore said the court has made changes to make the best use of jurors’ time with automatic calls telling them when they are needed in court, as opposed to arriving every day of the court session to potentially be dismissed. The summons itself has a number that can be called so jurors can determine whether they actually do need to appear in court — a response to some cases that are settled last minute before trial.

“If anybody has any questions about their jury duty, they’re welcome to call our office,” Paramore said. “We just don’t want people to get show cause orders and have to explain why they didn’t come to court.”