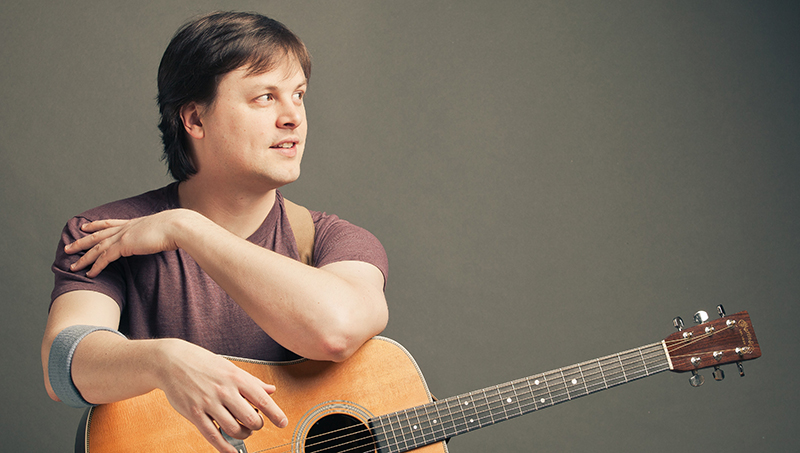 ONE MAN SHOW: Artist Jeff Miller will bring his looping back to the Turnage Theatre on Saturday night. Looping is the act of recording layers of guitar licks, rhythm and vocals live and layering them together to create the rich sound of a full band. This is Miller’s third Turnage appearance. (Jeff Miller)

It starts with a single sample of music, a recorded span of melody, of harmony, of voice and rhythm. The recording “loops” around, starting over and another layer of music is added — layer upon layer added until one person, with one guitar, sounds as if he’s part of a full band.

This is the work of Jeff Miller. He’s a guitarist who prefers to play with a band, but when he hits the road, or is recording, he’s a looper, a solo act surrounded by a sea of sound.

Miller returns to Arts of the Pamlico’s Turnage Theatre on Saturday at 7:30 p.m.

It was watching legendary guitarist Phil Keaggy at work that inspired Miller to become what critics call “a total master of the loop/sampling pedal” and a “guitar virtuoso.”

“I first heard Phil Keaggy live in concert in 1998,” Miller wrote in an email. “I was already a big fan, but I did not know that he used looping pedals. I didn’t even know that looping pedals existed. When I went to the show, I was blown away by what he was doing, and immediately thought that I needed to look for one.”

He may have been blown away by Keaggy’s skill, but Miller realized he could do more with looping, and began to develop his own style — one that eventually led to Keaggy sitting in Miller’s fifth album, “Loops.”

Miller tours much of the summer; this week he’s playing venues on Ocracoke, and next week he starts more than a month of shows in Pennsylvania, West Virginia, Ohio, Kentucky and Tennessee. For those who’ve never experienced Miller’s brand of music, the reaction is usually one of disbelief, he said.

“The response is usually dramatic,” Miller said. “Some people don’t believe that I’m actually recording myself live, during the show. They think that I’ve prerecorded parts, loaded them into the pedal, and am triggering them at the show. Some looping pedals actually have this feature, but mine do not (and I wouldn’t use it at shows if they did).”

Instead, Miller uses the stage as an educational platform.

“I will often do a short demo of the pedal, to explain what I can do with the pedals, and most people ‘get it’ at this point,” Miller wrote. “I also see people in the audience explain to their neighbors what I’m doing, to try to help them understand the concept. More and more performers are using looping pedals these days, but I’m always honored if I am the first artist that a person gets to hear using loops.”

This is Miller’s third performance at the Turnage Theatre and one he said he’s looking forward to.

“I’ve had a great time doing shows there, meeting new people and making new friends.  The audiences have been engaged and interactive, which is great,” he said.

Tickets to Miller’s show are $14. The Turnage Theatre is located at 150 W. Main St., Washington.