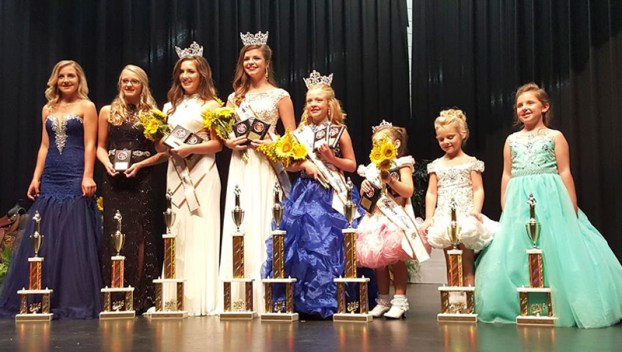 ACCOLADES: Contestants from the inaugural Miss Sunflower Pageant show off their prizes. 2018 marks the third year of the pageant, which each year awards one lucky young lady with a $1,000 scholarship. (Daily News)

There she is … Miss Sunflower.

With the Raised in a Barn Farm-sponsored N.C. Sunflower Festival only a week away, the ceremonial queens of the festival will be crowned this weekend during third-annual Miss Sunflower Festival Scholarship Pageant at the Turnage Theatre.

While the big day is set for Saturday, the responsibilities of a Miss Sunflower continue for a full year after her selection. In addition to attending this year’s Sunflower Festival, winners are also expected to appear in the Chocowinity, Washington and Bath Christmas parades. The young ladies are also expected to engage in volunteer work and to conduct themselves with good character during their reign.

“Between this year and next year, we try to encourage them to be a positive role model, to give their time to the community and to reach out and do community activities, ” Raised in a Barn Farm owner Mandy Boahn said. “Somewhere in our world, we have lost those truly genuine, good role models. … We are really trying to set off a generation of having good morals and becoming good role models for other kids in their communities.”

With five age divisions, the pageant will highlight young ladies from birth to age 18.

The seedling division, composed of infants and toddlers from birth to 3 years old, is not judged and each contestant will receive a participation trophy.

The next division, Tiny Miss Sunflower is open to contestants ages four to six, and the Little Miss category features girls ages seven to 10. Winners in these divisions will receive trophies and a $50 cash prize.

The Teen Miss Sunflower contest features children ages 11 to 14, with a grand award of a $100 cash prize. The oldest age category, Miss Sunflower, is for teenagers ages 15 to 18, with a grand prize of a $1,000 scholarship at the end of her reigning year.

“In the real world, beauty is only the cover of a book,” Boahn said. “It doesn’t matter how nice that cover looks, when you start reading the story, a bad story is a bad story. We do put some stipulations to encourage the positive we are trying to set forth.”

The Miss Sunflower Festival Scholarship Pageant will be held at the Turnage Theatre beginning at 4 p.m. Saturday. Admission is $5 and the pageant is open to the public.

Dancing for a cause at the waterfront

Pulsing Latin music, sweating bodies, furious dancing; it’s not a scene from some underground dance club, but rather a glimpse... read more