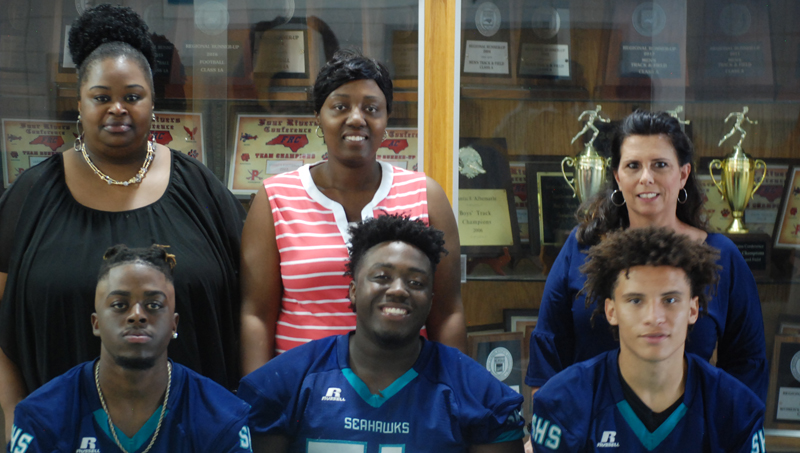 “I didn’t know I was going to be able to play college football, so just to get this opportunity to play football was amazing,” Rhome said. “So I know I need to take advantage of (this opportunity) because most high school players never get a chance to have a signing day. It was a really amazing feeling.”

Not only do most high school football players not get a chance to play in college, but even fewer get to play college ball with some of their high school teammates. All three said they are looking forward to playing together at the next level, citing reasons such as it will help ease the transition from high school to college because they’ve known each other so long.

“It’s going to be easier for me because I have some people on the team that I’ve known and played with almost my whole football career,” Ebron said. “So I feel like the transition will be a little bit easier, knowing that they’ll be there at the same college as me, playing the same sport as me.”

Minor also said he’s looking forward to it because they all have a strong bond and have a good time together.

“It’s awesome because it’s like I still have family with me, friends. Staying in the dorms with them, still going crazy like we always do, turning up on the field, crank it up with them,” Minor said.

Southside football coach Jeff Carrow said he thrilled for his former players, not just because that they’re moving on to the next level, but because of the growth he’s seen from them these past four years.

“It’s awesome. Any chance any coach can get a guy to go to the next level, at any level, it makes the coach proud. Seeing that these guys are actually going to the same school together, staying together as a Southside family is just good to my heart,” Carrow said. “The growth that every one of them has shown in four years is the biggest thing I’m most impressed with, on and off the field, maturity-wise, stepping up to be leaders their senior year, and then all three of them had a really good senior year.”

While Ebron, Rhome and Minor are moving on from Southside, they still look back fondly on their time there. Rhome said he had too many good memories to pick just one, but Ebron and Minor agree on their favorite memory playing as a Seahawk: beating cross-county rivals Northside 20-0 in the playoffs this past season after the Panthers won the Anchor Bowl in the regular season matchup.

While the three will be playing football for the Battling Bishops, that won’t be their only focus. Ebron said he is planning to major in nursing, while Minor said he will study computer science. Rhome’s plans are to major in business and minor in music and then pursue a career in audio production.

Williams begins his quest to make Denver’s squad with…