Cat coalition bands together for proactive approach to overpopulation 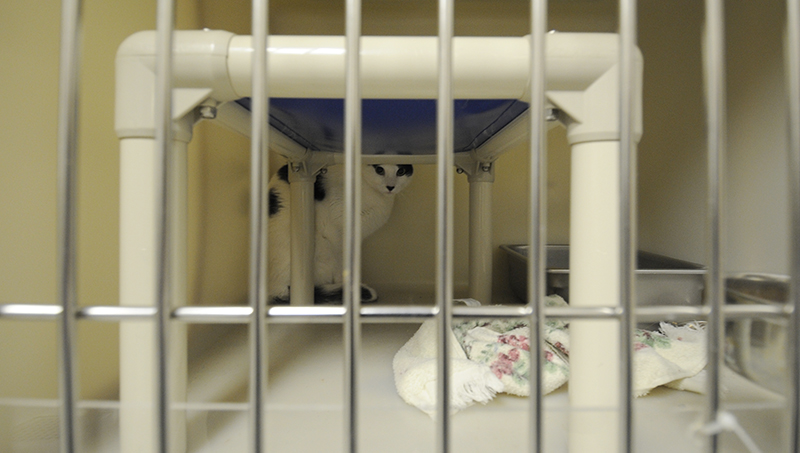 OVERPOPULATION: A partnership is working together to spay/neuter cats that live in colonies to prevent cat overpopulation. The cats in these colonies are fed, but have no official owner, and sometimes end up in the local animal shelter when their numbers swell. (Vail Stewart Rumley/Daily News)

It works like this: trap, spay/neuter, return. This weekend, several organizations will be teaming up to do exactly that — trapping members of unowned cat colonies, performing the operations, then transporting the cats back to their “homes.”

The Humane Society of Beaufort County, Beaufort County Animal Control, Paws of Love cat rescue and FOR (Feline Out-Reach of Beaufort County) are teaming up with student veterinarians from N.C. State University’s College of Veterinary Medicine to provide the services, from catching to returning, according to Marty Poffenberger, DVM, and HSBC president.

It’s a proactive approach to overpopulation in the county, one that organizations have been doing on a smaller scale previously.

“There’ve been rescue groups working on it. Paws in Love, they’ve been working on trap-neuter-release for a long time, and so has FOR, that’s Nancy O’Neill,” Poffenberger said.

They’re targeting cat colonies, known places where a large number of cats can be found. These cats are fed by someone, but technically, no one owns them, so no one is responsible for spaying/neutering. Working together to prevent new litters from being born will mean less animals end up in the county shelter, Poffenberger said.

“These are cats that are in places that they’re going to be there. If you can get them spayed or neutered in a reasonable amount, they’ll be cared for,” she said. “Periodically they just in up in the shelter, and we’ve been trying to bail out a boat with a hole in it. (Working) together, we can have a great deal of success.”

Animal control and volunteers will be assisting with trapping the cats, as well as washing and cleaning cages. In addition to spaying/neutering, the cats will also be vaccinated and treated for fleas and will be kept overnight during recovery.

“Dr. Poffenberger approached me about this, and we wanted to support this effort in every way we could,” Carnie Hedgepeth, Beaufort County Emergency Management’s director of emergency services.

Hedgepeth made it clear that none of the cats being picked up in Animal Control trucks  in the trap-spay/neuter-return operation over the weekend will be destined for the shelter.

“Our role with that this effort would be to help capture, spay/neuter and release to prevent future pet overpopulation,” he said. “I’m just excited that we’re doing this together. It’s going to be good venture with us, the Humane Society and the volunteers. To work with them all together in a coalition — that’s going to be a good thing for all of us.”

While several cat colonies have already been identified for participation in the effort, Hedgepth encouraged residents to call the Humane Society or the shelter if other, unidentified, colonies are out there.

HSBC will be housing the student-vets from N.C. State and is currently hosting a cat sticker fundraiser to help assist with lodging costs. For more information, call the Humane Society of Beaufort County at 252-946-1591.