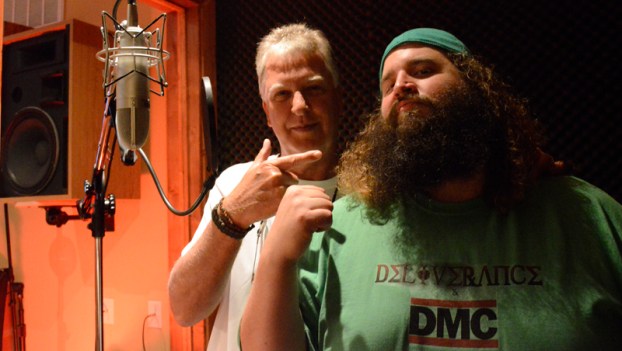 When he was just a kid, Scott Coleson began exploring the world of hip hop. At age nine, his young understanding of the rap world was shaken when a cousin showed him a collaborative cover of “Walk this Way” by RUN-DMC and Aerosmith.

“When I heard it, I was like, ‘This is what I want to do,’” Coleson recalled. “The first time I heard it, I fell in love. They literally got me started on my journey.”

Twenty-three years later, at age 32, Coleson now goes by the name Deliverance, and has just collaborated with DMC on a new track. The hip hop superstar drops a verse in Deliverance’s single “Slave to the Rhythm.”

While the artist lives in Goldsboro, his connection to Washington comes through local producer and engineer Blake Scott, owner of STRS (Star Trak Recording Studio). The two have been working together for the past three years. Scott, who has worked with stars of the music industry for decades, sees great potential in Deliverance, predicting continued success for the rising star.

“Scott came in here with one song that was the turning point in his whole career and sound,” Scott said. “I told him, ‘That’s it, you are there.’ He found himself, and that’s something a lot of artists don’t do.”

While laying this latest track with DMC may propel Deliverance’s career to a new level, it has been a long road to get to this point. He began writing at age 12, reading dictionaries and thesauruses to improve his vocabulary. At 16, he cut his first record. Overcoming hurdles such as poverty, homelessness, legal troubles and abuse, Deliverance says that a profound spiritual experience helped elevate his music.

“During the process of my journey, God took away from me all of this music because I was doing it for the wrong reasons,” Deliverance recalled. “Instead of doing it because I love it, I was on a quest for fame, fortune and money. For six years of my life, there was no music.”

Taking care of his ailing stepfather during those years, he learned how to forgive and how to love, the catalyst of a spiritual change. Before he passed, Deliverance’s stepfather encouraged him to go and chase his dream. A week later, he began making music again.

It was soon after this that he met DMC at a comic convention in Durham. After a 30-minute conversation, the two exchanged information, eventually leading to the collaboration on “Slave to the Rhythm.”

“When I heard it, it was just surreal,” Deliverance said. “To hear him behind me on a record and then thinking back to “Walk this Way,” it’s crazy. He’s been really supportive of the whole thing.”

On the mic, Deliverance has a style that hearkens back to the older days of rap; there’s no auto-tune and he doesn’t copy and paste on his tracks. His lyrics have a message, offering profound commentary on the state of the world. Above all, Deliverance gives glory to God for his success, keeping his own ego in check.

“I’ve fought my own demons to get to this place,” Deliverance says of his journey. “Everything I write is a part of me. Every time someone hears a record, it’s a piece of my soul that I’m giving to people.”

Deliverance, working alongside his wife Jasmine, also has his own label, Vicious Tunes Music Group. His music is available on Google Play and Spotify, as well as www.vicioustunes.com.

Church reflects on past with vision for the future

For Mona Paige, the process of exploring the history of Washington Heights Church of God began with a simple message.... read more