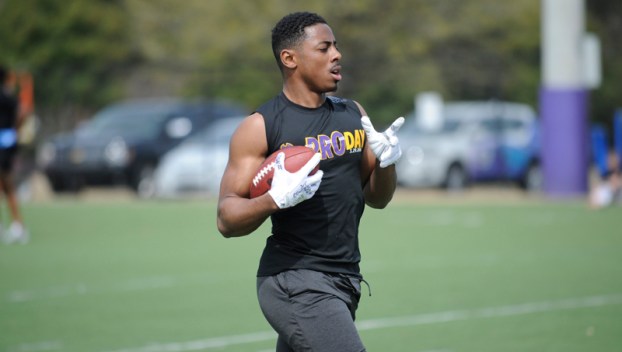 Jimmy Williams has faced this type of situation before: battling for a roster spot and playing time against more heralded teammates. First it was at East Carolina University, where the former Washington High School star joined the football team as an invited walk-on in 2013. Through hard work, determination and self-belief, Williams earned a scholarship and a starting role.

Now in Denver after the Broncos signed the wide receiver as an undrafted free agent, Williams is looking to repeat the feat at the professional level. He had his first taste of the NFL when he reported to Denver’s rookie minicamp but Williams finally had the opportunity to practice with and against NFL veterans when the Broncos held organized team activities and a mandatory minicamp.

For Williams, his time with the Broncos has gone smoothly so far.

As is the case when moving up a level in competition, everything on the field is faster than it was in college. Williams said learning the speed of the game in the NFL was one of the biggest adjustments he had to make, adding that practices and position meetings were ran the same way as back at ECU.

While play in the NFL is physically faster than in college, the mental side is also more demanding, according to Williams.

“You got to remember more. You got to know more. You feel like you can’t have as many mistakes,” he said. “The pressure level is a little bit higher than it was in college.”

Despite the differences, Williams said there’s no need to change how he plays or practices. It’s at a higher level, but at the end of the day it’s still football. He compared the experience to making the move from high school ball to the collegiate level.

“You don’t really change. You still have the same mindset. You come in here and you got to earn your way,” the 5-foot-11-inch playmaker said. “It’s kind of just like coming into college honestly.”

Being with the Broncos has given Williams the opportunity to practice with and against proven NFL players, such as Pro Bowl receivers Demaryius Thomas and Emmanuel Sanders, as well as Pro Bowl cornerback Chris Harris Jr. Williams said playing with proven superstars makes the competition level a lot higher, which he finds fun and exciting due to his love of competition.

While having fun competing with them, Williams said he is also learning from the team’s established players. The professionalism players like Thomas, Sanders and Harris Jr. have is something Williams noticed. He said they always play at a high level and look to improve as players, despite what’s going on in their lives off the field.

“You’re there to play football. You show up and you clock in and you know you are all about football. That is what it is about. It’s about going out there and being professionals and playing at a high level,” Williams said. “I feel like the people that I am watching, they’re doing that every single day. They are going out there, and they are playing like professionals. There is always something that can make you better. Even within one practice, they’re (making improvements). They’re being better at it than the day before.”

Now that the final practices before training camp have concluded, Williams has returned to eastern North Carolina. Even though he has a break until he heads back to Denver, it’s not going to be just rest and relaxation. He said he plans to balance work and leisure while home.

“(I will be) training and working on the things that I need to work on to head into training camp at the highest level I could possibly be,” Williams said. “A lot of this is going to be training and tuning up the things I need to tune up, getting better, and really just relaxing, trying to get my mind off of football a little bit so I can be relaxed going into training camp happy, not too uptight or anything like that.”

Williams’ battle for a roster spot will continue on July 28, when the Broncos begin training camp.