Nurse singled out for extraordinary service 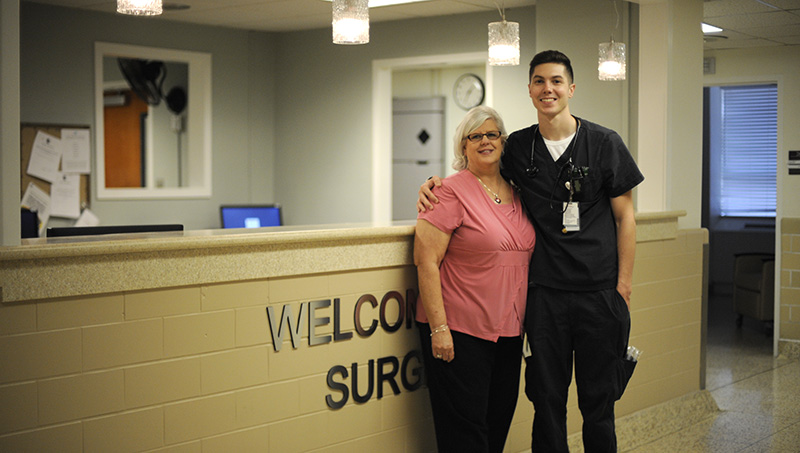 ON 2-EAST: Registered Nurse Matt Anderson takes a break from his duties in the 2-East Surgical Unit to talk about his DAISY award, an award recognizing extraordinary nurses within the Vidant System. Anderson is pictured with Vidant Beaufort’s Leanne Fulcher, who nominated him for the award after witnessing Anderson’s dedication firsthand during her mother’s hospital stays. (Vail Stewart Rumley/Daily News)

They’re the unsung heroes of society. Day in and day out they care for others, dolling out medications and treatment to the ill, extending compassion and kindness to their charges. And every now and then, one of them is singled out for their work and their passion.

Such is the case with Matt Anderson, a registered nurse at Vidant Beaufort Hospital. Anderson was selected as this year’s recipient of the DAISY Award for Extraordinary Nurses, an honor recognizing nurses who provide a level of care beyond the norm. The Vidant Medical System awards the DAISY each year through submitted nominations — the awards are judged by a committee which neither knows the name of the person nominated nor the hospital where that person works. It was started in 1999 by the family of Patrick Barnes, whose nurses’ compassion and dedication inspired the family to create the program, and has been adopted by medical systems worldwide.

It’s less shocking to the people who work with Anderson.

Anderson was nominated by Leanne Fulcher, Vidant Beaufort clinical informatics EHR coordinator, because of the treatment her mother received from Anderson during three hospitalizations and two rehab stints.

“Matt just picked up and developed a relationship with her. He treated her like an important person. He’d come by and visit when he didn’t have to; he came by and spoke to her on her last trip home. It made it emotional and appreciated,” Fulcher said.

For Anderson, the one-on-one relationship building is part of his job, but, more importantly, it’s part of who he is.

“At the end of the day, it’s not all about medicine,” Anderson said. “It’s easy to develop an idea about care, and form a judgment about care, but when you talk to them, you find out it should be completely different.”

“He respected her. He listened to her,” Fulcher said.

Anderson extends the same courtesy to family visiting his patients, offering them help with anything they might need while visiting their loved ones, Fulcher said. In many ways, such attentive service is a tradition: Anderson’s mother worked at Vidant Beaufort, as did his grandmother for 30 years. When he started attending Beaufort County Community College, he naturally gravitated toward the profession.

“I fell in love with anatomy and physiology,” he said.

It was his BCCC professor Catherine Gouge, a 27-year-old MD with creation of the National Flu Model on her resume, who inspired Anderson to become a nurse. After graduation, he became part of Vidant Beaufort’s New Grad Cohort Program, in which new nurses rotate through departments for a year to find their calling. For Anderson, that was the 2-East Surgical Unit.

“I found my niche. I’m a wound freak. I like wounds, incisions, surgeries — that’s what I like,” he laughed.

He also found something else at 2-East: inspiration in the form of fellow nurse Marty Overholt.

“He mentored Matt. Matt gives him credit for shaping him into the nurse he is today,” said Anderson’s wife, Kayla, who also works at Vidant Beaufort as an education instructor.

These two nurses introduce the next generation of boys to career possibilities, according to Pam Shadle, Vidant Beaufort’s director of marketing and community outreach and development.

“We don’t have many male nurses, but we’re starting to get more,” Shadle said. “I think Matt and others like him are good role models.”

“It makes me want to do better. It makes me realize you touch your patients and their families (too),” Anderson said. “It’s not hard to be nice to people — it’s hard to be mean.”