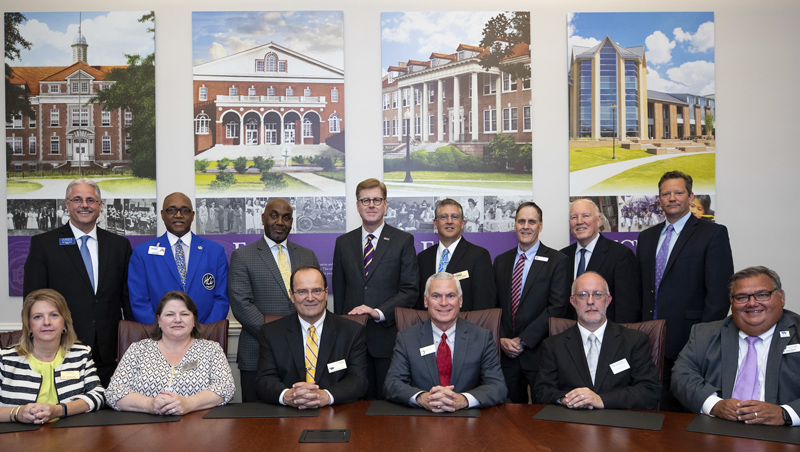 A pair of new agreements between community colleges and universities may help save students time and money as they pursue four-year degrees. While the first is designed to allow simultaneous admission to BCCC and East Carolina University, the second will help students transfer to any public university in the state of North Carolina.

Students at Beaufort County Community College will begin to see the impact of the two agreements next semester.

In June, ECU and 14 community colleges in the surrounding region, including BCCC, signed a co-admission agreement that is designed to improve transfer student access and success through a collaborative degree completion program.

Students will apply to a participating community college and ECU simultaneously and commit to maintaining full-time status. Upon completing an associate degree, they will seamlessly transition into degree-completion programs at ECU.

“Our most fundamental goal is to make college attendance a far less daunting endeavor for these students who might not think that going to college is within their reach,” ECU Provost Dr. Ron Mitchelson, said in a press release in June. “In particular we want these students to understand that the community college/university pathway is very cost effective and to ensure that the transfer from the community college to the university is relatively seamless.”

Mitchelson pointed out that completing the first two years of a four-year degree at a community college can save a student $43,000, according to a national report from the Educational Advisory Board.

While the co-admission agreement between BCCC and ECU stands to make the transition between the two schools essentially seamless, students interested in other North Carolina universities may also benefit from a new articulation agreement in effect statewide.

When registering for classes at BCCC, students can now view baccalaureate degree plans for every major in a transfer program. These plans make it easy for a student to start their bachelor’s degree closer to home at a community college and provide families with a significant financial savings.

“Every public university in North Carolina has them,” explained BCCC Dean of Arts and Sciences Lisa Hill in a press release. “You can just click on the university of your choice and plan two years of community college classes. All courses listed are guaranteed to transfer and will save students time and money. It’s that transparent now.”

In essence, the agreement prevents students from having to retake classes due to disagreements between the community colleges and universities on which courses can be used for credit hours towards a four-year degree. To help students who plan to transfer navigate their major, BCCC offers a College Transfer Success course to incoming students.

“We want to make sure that when students go off to ECU, NC State or UNC-Wilmington, that they get through efficiently,” Hill continued. “We don’t want them to get there and find out that they are going to have to go for an additional semester or two.”

Board asked to review load-management policy for possible modifications