Coach’s memory lives on in scholarship 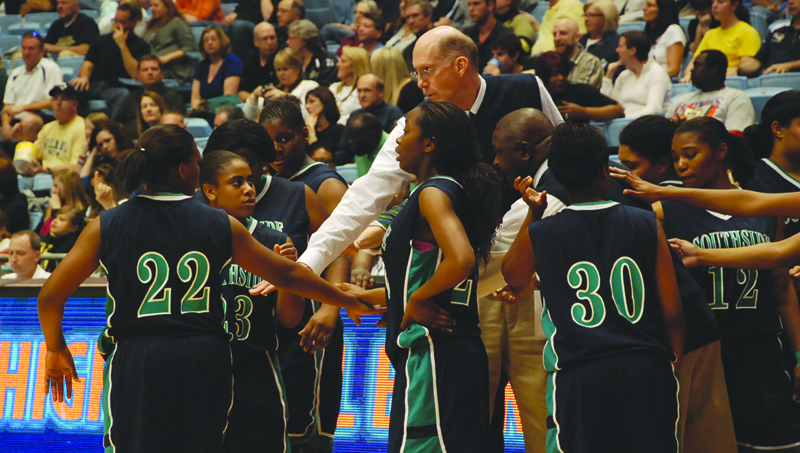 HUDDLED UP: Bill Lake rallies his team during a game years ago. After coaching at Southside for nine years, Lake’s memory will be honored with the Bill Lake Memorial Scholarship. (Daily News)

Just over a year ago, Southside and the local community lost a man in Bill Lake who touched so many lives through his coaching, teaching and church involvement. Now the former Lady Seahawks basketball coach’s memory will be honored through the Bill Lake Memorial Scholarship, which was awarded for the first time at Southside’s end-of-year Spring Athletic Ceremony.

“He loved coaching; he loved his kids,” Kathy Lake, Bill’s wife, said. “It’s something that was near and dear to his heart, the kids at Southside. That’s why we wanted to set up something that would be ongoing there in his memory.”

While Lake was a basketball coach, his wife described how he was involved in all the sports at Southside. He drove the football team’s bus, ran the scoreboard for soccer, baseball and softball games, coached the golf team for a few years and helped out with the track team. Lake said the scholarship is a continuation of her husband’s love for Southside and its students and a way to honor all the work he did there.

With this being the first year the scholarship is being awarded, Lake said she had a special idea for who should receive it. She felt the first recipients of the $1,000 scholarship should be “his girls,” athletes he coached.

“When I talked to (Southside Athletic Director) Sean White last summer I said, ‘I already know who I want to give the scholarship to.’ I said any girl who started as a freshman with (Coach Lake), because he coached the seniors that graduated this year, they were on his team as freshmen, and competed all four years in basketball. There ended up being three,” Lake said. “He would have never chosen between them for a scholarship, so we gave it to all of them.”

Those three were Symone Ruffin, Danielle Ruffin and Michaela Dixon.

The trio, who describe Coach Lake as a great coach and great person, said they were honored to be selected for the scholarship.

The fund for the scholarship was set up almost immediately, with the family asking for donations to be made, in lieu of flowers for the funeral. Showing just how beloved Coach Lake was, donations came from all over, including from his old college basketball teammates.