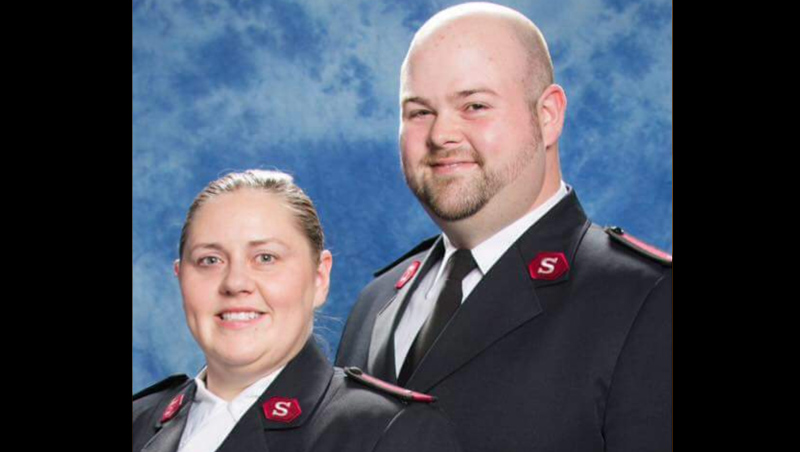 NEW LIEUTENANTS: Lieutenants Karl and Teresa Bush, of the Salvation Army, arrived at their new post in Washington on June 18. Together, they hope to build stronger relations between the Christian nonprofit and the community. (The Salvation Army)

When the two met at a youth retreat, Karl was assisting the commanding officer at the Washington congregation. From here, their journey took them to Greenville and then to Atlanta, where they attended The Salvation Army Evangeline Booth College from 2013-15. The two were commissioned as officers in 2015 and sent to Winston-Salem, where they spent the past three years of their ministry.

“We received a call at the end of April and they said, ‘Karl and Teresa, you’re going to Washington,’” Karl recalled. “We talked with our divisional commander about it for a few minutes and that was that. We were very excited. We have a heart for this area.”

As officers in The Salvation Army, the lieutenants Bush will pastor The Salvation Army congregation and also oversee the administration of its two family stores in Washington and Chocowinity, along with the social service programs, character-building youth programs, women’s and men’s programs and weekly Bible study.

Together, the two have been charged with leading operations for The Salvation Army not only in Beaufort County, but in five surrounding counties as well, including Martin, Hyde, Tyrell, Washington and Bertie counties. The organization also coordinates disaster relief efforts in the region.

For Teresa Bush, service in The Salvation Army runs deep. She is a fifth-generation Salvationist, tracing her family’s involvement in the organization all the way to her great-grandmother. Her aunt and uncle were officers in Washington almost 30 years ago. Karl, meanwhile, is the first in his family to join the organization, which he discovered during a difficult period of his life.

“I was homeless when I met The Salvation Army in Rock Hill, South Carolina,” Karl Bush said. “I went to get help, they paid first month’s rent to get into an apartment, and I went back the next day and started volunteering.”

Moving forward, the two hope to build strong relations between The Salvation Army and the community, letting people know that the organization is there for them in their time of need. With a presence in Washington since 1939, Karl and Teresa said they hope to enter the organization’s 90th year.

“This community has supported The Salvation Army for a long time,” Karl Bush said. “We’re at a point where we’re trying to reengage that in a different way.”