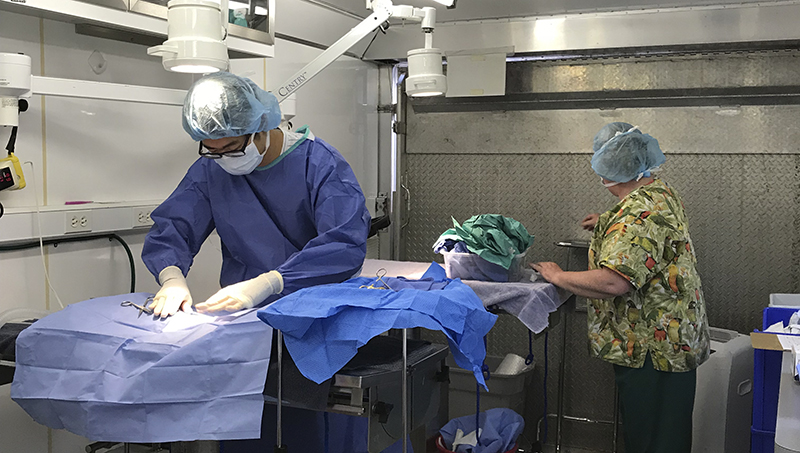 COMMUNITY SERVICE: A student at N.C. State University College of Veterinary Medicine performs a surgery in the school’s mobile hospital over the weekend. The event was held in Washington through partnership with the school, Beaufort County Animal Control, Humane Society of Beaufort County and cat-rescue nonprofits. (Marty Poffenberger)

Volunteers, veterinarians and their students herded cats last weekend — 103 of them, to be exact, as part of a Trap-Neuter-Release program aimed at decreasing a growing population of unowned cats in Beaufort County.

Dr. Kelli Ferris and Dr. Korinn Saker, both assistant professors with the N.C. State University College of Veterinary Medicine, and a group of mostly third- and fourth-year vet students arrived in Washington on Thursday night in their mobile hospital, and spent the next three days performing the service for this animal community and the people who care for them.

“The vet students use this as an opportunity to get additional surgery experience, as well as giving back to the community,” said Dr. Marty Poffenberger, a Pamlico Animal Hospital veterinarian and president of the Humane Society of Beaufort County.

The project involved a variety of organizations who assisted in the trapping, the caring of the animals before and after surgery, the veterinarians and their students performing the surgeries, and those returning the animals to the cat colonies where they live.

“The local organizations that have been doing TNR ( trap-neuter-release) commented that this event gave them a renewed spirit  to continue in their difficult task of combating overpopulation,” Poffenberger said. 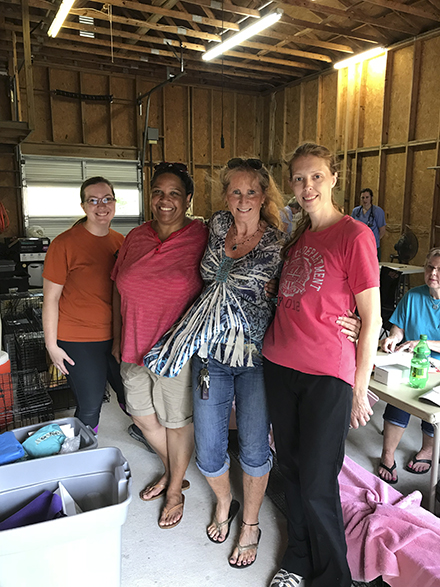 VOLUNTEERS: Volunteers from Paw of Love cat rescue and FOR (Feline Out-Reach of Beaufort County) helped identify areas where spay/neuter surgeries could best decrease cat overpopulation, as well as assist with the cats’ care. Both organizations have established trap-neuter-release programs.

The colonies were identified by local organizations such as Paws of Love cat rescue and FOR (Feline Out-Reach of Beaufort County), both of which have been doing TNR for several years on a smaller scale. Beaufort County Animal Control pitched in with trapping and transporting the animals, while HSBC volunteers cleaned cages and cared for the animals, in addition to housing the vet students for the weekend.

“The weekend was a huge success,” Poffenberger said. “It was wonderful to see the community involvement.”

The event is a proactive approach to animal overpopulation: those having undergone the surgeries will not contribute to new litters, so less animals will end up in the county shelter awaiting adoption or euthanasia.