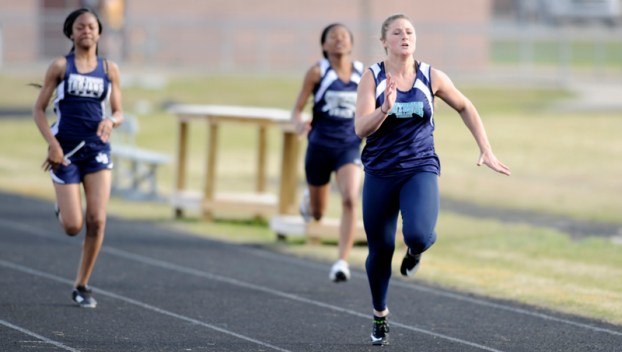 SPEED DEMON: Southside’s Jacqueline Wood blows away the competition at a track meet earlier this season. Wood was one of 300 athletes from all 50 states selected to compete for Team USA at the 18th annual Down Under International Games in Australia. (Ashley Vansant | Daily News)

After wrapping up a successful track and field season that included winning first place in the girls’ 4×200-meter relay at the 2018 NCHSAA 1A State Championship, many people would probably use the summer to relax by the pool, sip on some lemonade and take it easy. But that’s not the case for Jacqueline Wood.

The Southside track star has been hard at work training and preparing for her trip to Australia to compete in the 18th annual Down Under International Games this month.

To make sure she’s fit and ready to compete in the games, which are similar to the Goodwill Games but on a smaller scale, the rising senior said she’s been cross-training. Also a member of Southside’s volleyball team, the sprinter has been taking part in the team’s voluntary workouts over the summer, as well as lifting weights.

Wood said she hasn’t been running as much to allow her body to recover from the season.

“I’ve been running behind my house, probably about a mile or two miles. But I haven’t done any sprints,” Wood, who owns the Southside record in both the 100 and 200-meter dashes, said. “I’ve been kind of laying off (from sprinting) so I can regain myself so I’ll be more loose.”

Wood will be one of 300 athletes representing Team USA, with many more athletes from various other countries competing at the Down Under Games as well. But being surrounded by so many talented athletes won’t faze her, not after the successful season she just had.

“(After this past season) I have more experience and it shows me that, ‘Hey, I can do this kind of thing,’” Wood said. “I’m going to see probably a lot more faster girls from other countries, but I’m just going to try my best, and I’m just going to enjoy myself when I’m out there.”

While Wood is ambitious and wants to prove herself to people at the games by performing well, athletic success isn’t all that she said she can gain from the trip. She said she is looking forward to seeing and experiencing new things halfway across the world.

“I’ve never been out of the country before, I’ve never been on a plane before. This is going to be a real experience for me,” Wood said. “I’d love to take some gold home, some gold medals, but if I don’t, at least I made memories there in Australia.”

Wood has been training to make sure she’s in peak fitness to compete in Australia but that’s not the only preparations she’s had to make. She was selected to take part in the games, but every athlete is responsible for covering the cost of the 10-day trip.

To reach the $5,000 needed, Wood and her family held a fundraiser and received donations as well.

Not that the self-motivated athlete necessarily needs it, but Wood said the donations people made for her trip, as well as the words of encouragement she’s received, help drive her.

Wood begins her journey on Sunday, when she heads out from Raleigh to Los Angeles, before arriving in Queensland, Australia for the games.

Coach’s memory lives on in scholarship

Just over a year ago, Southside and the local community lost a man in Bill Lake who touched so many... read more