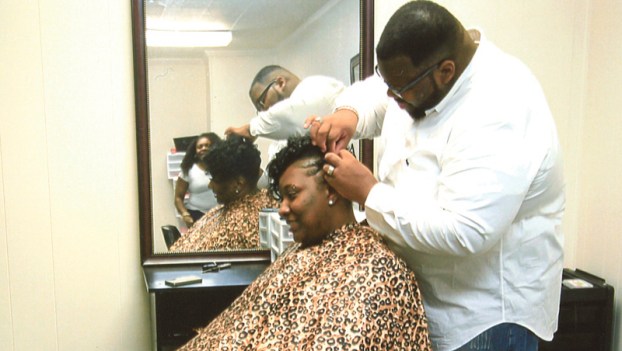 IN HIS BLOOD: Local stylist Quinten Hill has been fascinated with cutting and styling hair from a young age, having grown up watching his mother practice the craft. On Saturday, Hill and three local salon owners will face off in the first-ever Hair Battle Royale at the Turnage Theatre. (Quinten Hill)

Scissors, clippers and spray bottles will take center stage at the Turnage Theatre on Saturday, as some of the top stylists and barbers in Little Washington and beyond come together for the city’s first-ever Hair Battle Royale.

The dress-to-impress, red-carpet event is the brainchild of local stylist Quinten Hill, owner of Prophetic Designs Hair Salon on East Third Street. With doors opening at 5 p.m. and the competition beginning at 6 p.m., guests will have the chance to enjoy food, vendors and entertainment prior to the main event.

When the lights go down in the theatre, stylists will show off their talent live on stage, with elements of runway modeling playing into the competition. Hill, who has participated in live competitions before, decided to keep the formula for the first competition in Washington fairly basic.

“I’ve always wanted to have a hair show, but I didn’t know exactly how to put it together or how I wanted it to be,” Hill said. “I’ve competed in a few, and I’ve won a couple. I don’t really see too much for Beaufort County, so I wanted to do something to bring a little bit of excitement to Beaufort County, something where we could dress up and have some clean fun.”

In addition to the entertainment factor, Hill says he also hopes to make the event an educational endeavor. A variety of vendors with knowledge and passion for hair care will be on hand to offer tips for maintaining a healthy head.

“It’s also somewhere people can learn about the health and upkeep of hair,” Hill said. “They can become educated on their natural hair, as well as any kind of chemically treated hair. We have educational vendors that will be teaching people about taking care of their whole appearance.”

In total, there are four salons participating in the event, three from Washington and one from Plymouth. In addition to being a fun evening out, the program will also serve to benefit a new organization called TIP, which focuses on training, inspiring and preparing young African Americans in the community to take on the challenges of entrepreneurship and business ownership.

“If you’ve never experienced a hair show before, this is one you would like to come to,” Hill said.

For Hill, the art of cutting and styling hair goes back to when he was only 11 years old. His mother, Thelma Hill, styled hair in Washington for the better part of 45 years. Watching his mother do magic in the salon, he has been fascinated by the art ever since. Hill has been a licensed stylist for the past six years and opened Prophetic Designs Salon three years ago.

“It’s a lot to it,” Hill said. “It’s not just waking up one morning and deciding to do hair. If this gift is not born in you or this talent is not developed in you, it is impossible to master this trade.”

VIP tickets for the show are $30 and are available at Prophetic Designs, as well as three locations in Greenville; turning Point Hair Salon, Revive Hair and Mo’s Barber Shop. General admission tickets are available for $20 at the door the night of the show.

Washington’s City Council, during its meeting Monday, will conduct a second reading on a proposal to amend the city’s... read more