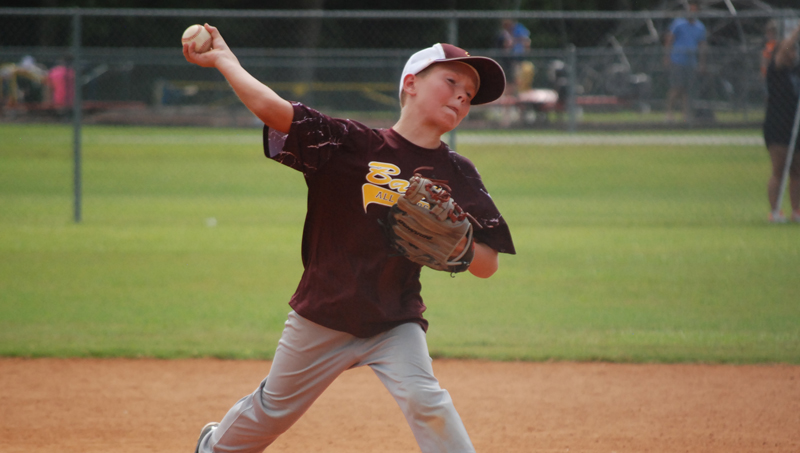 FIRING IT IN: Bath 10U’s Marshal Chase unleashes a pitch during his team’s 15-2 loss to Greene County on Sunday in the Little Tar Heel League district tournament. Despite the loss Bath can still make it to the tournament final, which would be a rematch against Greene County. (Sean Finnerty | Daily News)

CHOCOWINITY — After brushing aside its first two opponents, the Bath 10U All-Star baseball team picked up its first loss of the Little Tar Heel League district tournament, losing to Greene County, 15-2, on Sunday.

Greene County wasted no time in taking control of the game at Chocowinity Recreation Complex. The All-Stars of Greene County scored five runs in the top half of the game’s opening inning, building a lead they wouldn’t relinquish. A combination of good plate discipline and timely hitting were responsible for Greene County’s offensive output in the first.

The Greene County All-Stars drew two walks and racked up four hits in the first. The highlight of the inning was a Reed Kennedy double, the first of three he would hit in the game.

Bath’s Chase Hewitt led off the bottom of the second by drawing a walk, making himself Bath’s first base runner of the game. Jayson Battershell followed by dropping a single in front of Greene County’s charging right fielder. Hewitt beat the throw to third base, while Battershell took the opportunity to take second. Trenton Allen then ripped a single up the middle, scoring Hewitt and advancing Battershell to third.

Some coordinated base running was responsible for Bath’s second run of the inning. Allen swiped second base, and while Green County threw to second in an attempt to catch him in the act, Battershell saw his chance to score and stole home.

Unfortunately for Bath, that was the extent of its offense on Sunday. Bath managed only three more base runners throughout the rest of the game. On the other hand, Greene County became even more prolific at the plate, scoring nine more runs on the way to a double-digit victory.

Sunday’s loss was Bath’s first of the double-elimination tournament. A win in its next game will give them the chance to play for the district title in a rematch against Greene County.