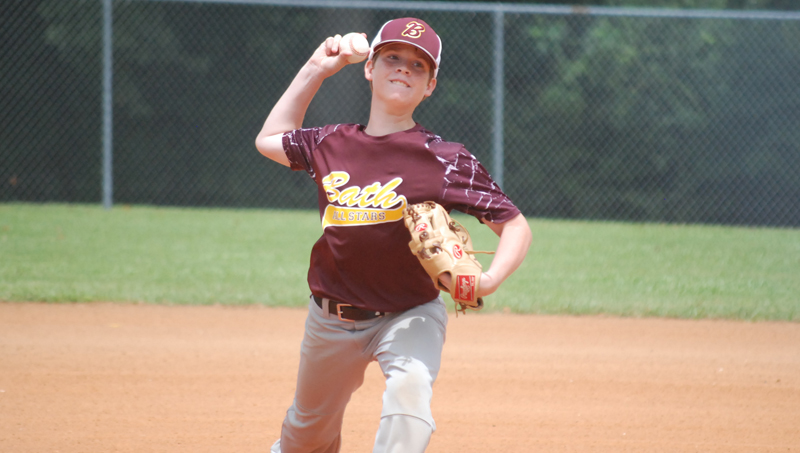 CHOCOWINITY — One fateful inning made all the difference between the Bath 12U All-Star baseball team and the Pitt County 12U All-Stars on Sunday afternoon. Trailing by a run entering the fifth inning, Pitt County’s bats came alive to score six runs en route to a 9-3 victory in the Little Tar Heel League district tournament.

Having just fallen behind Bath in the bottom of the fourth, Pitt County issued an immediate response when its next turn at the plate came in the fifth inning. Pitt County collected six hits in the inning, including two doubles, on the way to scoring six runs and taking a commanding 8-3 lead.

Pitt County’s D. McCray started off the rally by drawing a walk. That was followed by three consecutive hits, including a double from J. Southern, scoring McCray and R. Treachaway to give Pitt County a 4-3 lead. A passed ball allowed B. Peebles to score, while Southern moved to third base. Pitt County’s J. Smith singled to left field, bring home Southern. Now trailing 6-3, Bath brought in Bo Spencer to pitch.

But placing a new pitcher on the mound didn’t cool down Pitt County’s bats. After Smith stole both second and third base, R. Williams drove him home with a double. Williams eventually crossed home plate for the final run of the inning when L. Elks grounded out, making the score 8-3 in Pitt County’s favor.

Pitt County added an insurance run in the sixth inning, using its speed on the base paths to put runners in scoring position. McCray began the sixth with a base hit and proceeded to steal second base and then third. Peebles gave McCray a ticket home, dropping a single just inside the left field line, allowing McCray to score.

With a 9-3 lead, Pitt County had the opportunity to score even more runs in the sixth. After driving home McCray, Peebles stole second to place himself in scoring position. Continuing the trend, J. Robinson singled and then stole second, giving Pitt County base runners on second and third. But Bath’s Spencer was able to end the threat and the inning, getting Smith to fly out to center field. Unfortunately for Bath, it couldn’t get any offense going in the bottom of the game’s final inning.

Despite the final score, the game’s first four innings were evenly matched. It was actually Bath who looked first to score in the game in the bottom of the first. Batting second, Carson Clinkscales reached base after drawing a walk. Smith tried to pick off Clinkscales at first, but the Bath player dove back just in time. In an ironic twist, the toss back to Smith sailed over the pitcher’s head, allowing Clinkscales to advance to second. Clinkscales proceeded to steal third, prompting Bath’s supporters to make some noise, but a ground-out ended the inning and Bath’s hopes of scoring the game’s first run.

Pitt County responded by getting on the scoreboard in the top of the second. D. Sanders, pinch running after Elks drew a walk, got himself in scoring position by stealing second then advanced to third on B. Styron’s groundout. McCray followed by hitting a slow ground ball and was thrown out at first. But Sanders used the opportunity to make a run for home, sliding into home plate to beat the throw from first base.

Trailing 2-0 in the bottom of the fourth after Pitt County tacked on another run in the top of the inning, Bath finally got things going at the plate. Landon Modlin began the rally with a solo home run, energizing the Bath dugout. After a base hit, Clinkscales stole second and then third base. Bath then drew four consecutive walks, with the last two bringing runs home, to take a 3-2 lead.

Unfortunately for Bath, that was all it could produce at the plate for the day. Being a double-elimination tournament, Bath still has a chance to face Pitt County again and avenge the loss.