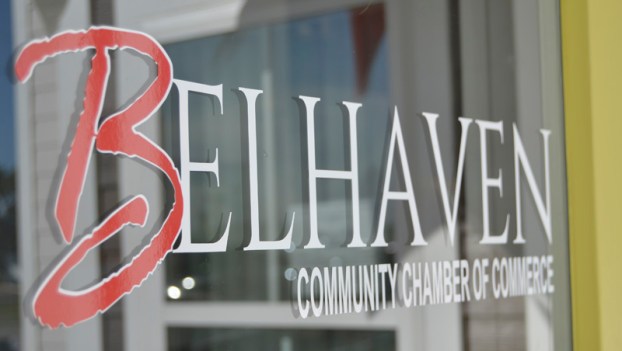 WELCOME: The Belhaven Community Chamber of Commerce opened its doors to the public during an open house on Friday, dedicating its new visitor’s lounge in the memory of Capt. Bill Iler. (Matt Debnam/Daily News)

BELHAVEN — At the heart of any strong business community, there is a strong chamber of commerce. On Friday, friends of the Belhaven Community Chamber of Commerce gathered at the organization’s new home on Water Street to celebrate the next chapter of the chamber’s history, and to honor Captain Bill Iler, a man who was a dear friend to the town of Belhaven.

While the Chamber has occupied its new location at 274 East Water Street since mid-May, the celebration Friday served as the public unveiling of the new facility. Complete with a welcome area, a copy room, a kitchen area and plenty of storage space, the building stands to serve the chamber’s needs for many years to come.

“It’s been tremendous,” Chamber President Dianne Bowen said. “We used to be at the old depot where the police station is. The lady who owned the building was very generous in letting us have it for a while, but we needed a place to be seen and relevant and like Belhaven, which is on the rise.”

Perhaps the crowning jewel of the new facility, however, is a beautiful boater’s lounge, conveniently situated to the town docks. The embodiment of the Belhaven’s motto of “The Boats Stop Here,” the lounge represents a new way for the town to show hospitality to the vessels that frequent the shores of the Pungo.

The name bestowed upon this new haven for mariners could not be more fitting. Christened the Captain Bill Iler Visitor’s Lounge, the space is named for a man who was brought to Belhaven by the fickle fates of the tides four years ago.

A frequent visitor to Belhaven on his 55-foot Trumpy yacht, Iler found himself experiencing engine trouble on the Pungo during one of his many voyages. As he settled in for repairs, he ended up staying in Belhaven for two years before his passing in 2016.

While Iler was only a resident of the town for two years, he made a monumental impact on the community during that time. From championing the cause of the Chamber of Commerce to offering political guidance to councilman-turned-mayor Ricky Credle, Iler poured his energy into making Belhaven a better place. As one who had experienced it firsthand, he was the one who created “The Boats Stop Here” campaign, singlehandedly raising $11,000 for the chamber.

For Chamber Director Diana Lambeth, Iler was more than a friend to the chamber; the two worked together on the water, chartering trips throughout the Inner Banks.

“He was my captain and I was his first mate, but he was most of all my dear friend,” Chamber director Diana Lambeth. “He died two years ago today. How appropriate it is that we honor him today. He loved the water and he was loved all over the Intercostal. He empowered the people of Belhaven to take pride in their town.”

Speaking of the man he considered to be a mentor, Credle reflected fondly on his time with Iler during the dedication.

“I was so glad that I met Bill,” Credle said. “Bill was not only a good friend. He was my mentor, someone you could call on… He taught me that no matter what people say, always go for what you believe in.”

To experience the best of Belhaven hospitality, visit the Chamber of Commerce from 10 a.m. to 4 p.m., Tuesday through Friday.

While the legal fate of the Beaufort County Board of Education’s attempt to withdraw from participation in the Northeast Regional... read more