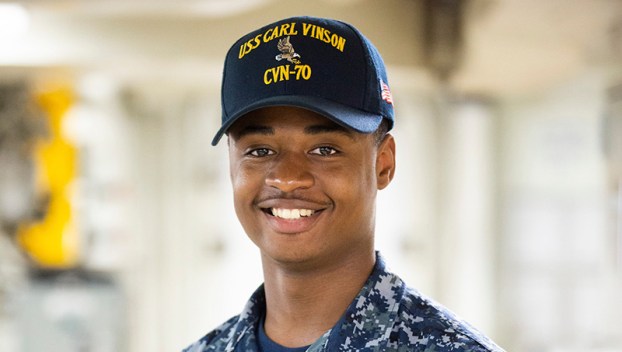 PEARL HARBOR — A 2017 Southside High School graduate and Chocowinity, North Carolina, native is serving in the U.S. Navy as part of the world’s largest international maritime warfare exercise, Rim of the Pacific.
Seaman Apprentice Ethan Harris is an aviation boatswain’s mate handling aboard USS Carl Vinson, currently operating out of San Diego.
A Navy aviation boatswain’s mate handling is responsible for directing the movement and spotting of aircraft ashore and afloat and operating, maintaining and performing organizational maintenance on ground-handling equipment used for moving and hoisting of aircraft ashore and afloat.
Harris applies the lessons learned from Chocowinity to working in the Navy.
“Growing up I learned the importance of being focused and being 100 percent focused is vital to the Navy’s mission,” Harris said.
As the world’s largest international maritime exercise, RIMPAC provides a unique training opportunity that helps participants foster and sustain cooperative relationships that are critical to ensuring safety at sea and security on the world’s oceans. RIMPAC 2018 is the 26th exercise in the series that began in 1971.
The theme of RIMPAC 2018 is Capable, Adaptive, Partners. The participating nations and forces exercise a wide range of capabilities and demonstrate the inherent flexibility of maritime forces. These capabilities range from disaster relief and maritime security operations to sea control and complex warfighting. The relevant, realistic training program includes, gunnery, missile, anti-submarine and air defense exercises, as well as amphibious, counter-piracy, mine clearance operations, explosive ordnance disposal and diving and salvage operations.
“During RIMPAC, I’m looking forward to spending time with my family who are in Hawaii and rooting for our Navy in the intramural sports activities,” Harris said.
This is the first time Israel, Sri Lanka and Vietnam are participating in RIMPAC. Additional firsts include New Zealand serving as sea combat commander and Chile serving as combined force maritime component commander. This is the first time a non-founding RIMPAC nation (Chile) will hold a component commander leadership position.
Twenty-six nations, 46 surface ships, five submarines and more than 200 aircraft and 25,000 personnel will participate in the biennial Rim of the Pacific Exercise. This year’s exercise includes forces from Australia, Brunei, Canada, Chile, Colombia, France, Germany, India, Indonesia, Israel, Japan, Malaysia, Mexico, Netherlands, New Zealand, Peru, the Republic of Korea, the Republic of the Philippines, Singapore, Sri Lanka, Thailand, Tonga, the United Kingdom, the United States and Vietnam.
As a member of the U.S. Navy, Harris and other sailors know they are part of a legacy that will last beyond their lifetimes providing the Navy the nation needs.
“Serving in the Navy gives me better life opportunities,” Harris said.
Additional information about RIMPAC is available at www.cpf.navy.mil.

With an average bite force of 2,125 pounds per square inch, it’s rare that many live to tell about an... read more