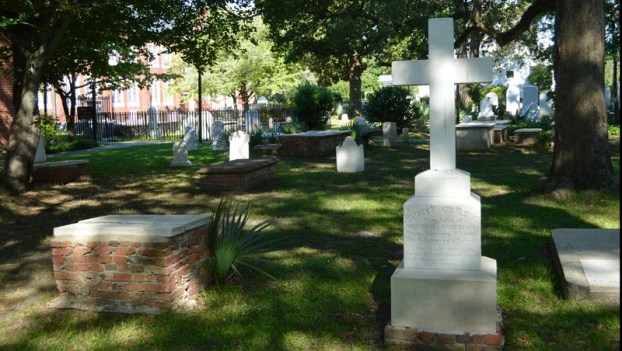 AMIDST THE PAST: With 260 marked graves dating between 1765 and 1890, the churchyard of St. Peter’s Episcopal Church offers a lesson in local history. By means of a self-guided walking tour, visitors can learn a tremendous amount about the area’s past. (Matt Debnam/Daily News)

WALKING THE CHURCHYARD: At the city’s heart, a historical treasure

A city steeped in history, Washington is a place that cherishes and celebrates its past. With more than three centuries since the settlement of this area, Washington and the surrounding countryside are awash in places of historic significance. Tucked away on the corner of East Main and Bonner streets, the churchyard of St. Peter’s Episcopal Church is one of these places.

“There’s a peaceful feeling when you walk the churchyard,” St. Peter’s member Riley Roberson said. “There’s a feeling that there’s something a little bit bigger than you going on.”

All told, there are 260 marked graves in the churchyard, ranging from 1765 to 1890. Three of the men buried there fought in the American Revolution, and 17 were veterans of the Confederate Army.

Set aside by Col. James Bonner when Washington was established, the land occupied by the churchyard was home to the first church building in the city. This “free church” was at the heart of the newly-formed town, and was utilized by Episcopalians, Methodists, Baptists and Presbyterians.

Unlike many old cemeteries, where years of wear and lichen have all but eroded the tombs and headstones, the headstones in the St. Peter’s churchyard are mostly pristine. Inscriptions on 200-year-old headstones are still legible. Bearing familiar Beaufort County names such as Bonner, Blount, Tayloe and DeMille, a stroll through the churchyard can reveal much about the history of the area.

The oldest tomb in the churchyard belongs to Thomas Bonner, who served as a Justice of the Peace for Beaufort and Hyde counties and the second sheriff of Beaufort County. He was buried in the churchyard in 1765. His sons, James and John Bonner, both served in the Revolutionary War, and the former was the founder of the City of Washington.

Overhanging the headstones, a variety of trees, some well older than a century, create a stunning interplay between light and shadow. Patsy Blount, who is interred in the churchyard, planted many of these trees in the late 1800s. Oak, cypress, birch, magnolia, cedars, dogwood and gingko can all be found within the confines of the cemetery.

Matching the stature of the pale white tombstones, the black wrought-iron fences add to the sense of antiquity in the air. Meticulously detailed and restored, the fences appear much as they might have when they were first installed.

“I think through history, you learn appreciation for where we were and where we are,” Roberson said. “History is a learning process, and it gives us direction too.”

The churchyard of St. Peter’s Episcopal Church is open to the public. Walking tour brochures are available at the church. For more information, call 252-946-8151.

BELHAVEN — At the heart of any strong business community, there is a strong chamber of commerce. On Friday, friends... read more