Washington Blue 10U squad falls in opening round game 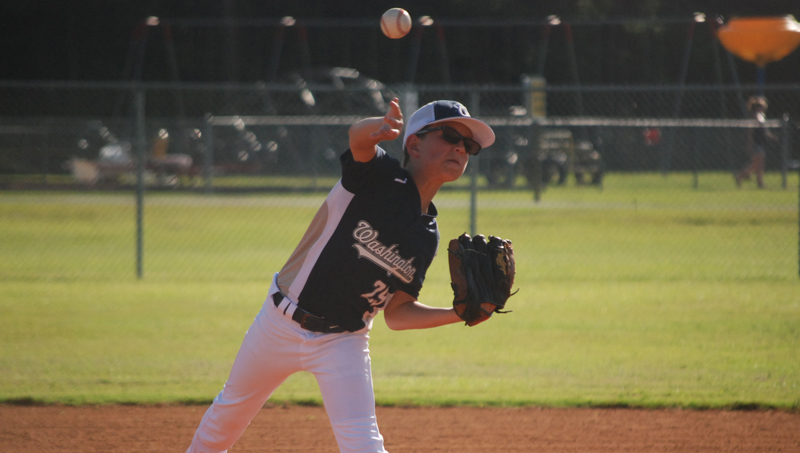 CHOCOWINITY — The Greene County 10U All-Star baseball team had too much offense for Washington Blue 10U All-Stars Friday evening, going on a seven-run scoring spree in the third inning on the way to a 12-2 win in the opening round of the Little Tar Heel League district tournament at Chocowinity Recreation Complex.

Already leading 4-0, Greene County blew the game open with its barrage of runs in the bottom of the third. Greene County collected seven hits during the inning, including two doubles. Tanner Outlaw started the inning’s scoring with a double into the gap between center and right field, scoring Riley Radford. Greene County’s next run came courtesy of Trey Bynum. In as a pinch runner, Bynum stole third before reaching home, thanks to a wild pitch.

Mason Dillon then pushed Green County’s lead to 8-0. The left-hander hit a stand-up double to the opposite field, driving home two runs. Greene County’s Easton Creech then used his speed to make an impact on the game. First, Creech hit an infield single by beating the throw to first. Then he stole second to get in scoring position. Reed Kennedy followed by hitting a single that allowed Creech to score from second. A two-RBI single from Radford, pushing Greene County’s lead to 11-0, capped off the scoring in the third.

After giving up so many runs in the third, Washington’s bats finally came to life in the top of the fourth. Jackson Walker led off the inning with a single and reached second due to a wild throw to first base. Holden Boykin followed with an infield single. The throw to first, in an attempt to get Boykin out, sailed over the first baseman’s head and hit the fence, resulting in a dead ball and Walker reached home for Washington’s first run as a result.

Boykin then reached third after a Greene County wild pitch and was brought home to score, thanks to a Sawyer Vosburgh sacrifice bunt. Washington really seemed to be getting into a groove at the plate, as Mason Rhem then hit the ball over the leaping center fielder’s head for a stand-up triple. Unfortunately for Washington, Greene County’s second baseman made a sensational over-the-shoulder catch, followed by a pop fly, to end the scoring threat and bring Washington’s momentum to a screeching halt.

Washington’s two runs in the fourth weren’t enough. In the bottom of the inning, after Dillon drew a walk, Thomas Turnage belted a double to bring Dillon home. That made the score 12-2 and ended the game, due to Greene County having a 10-run lead after four innings.