Pirates in the Port returns to Bath next weekend 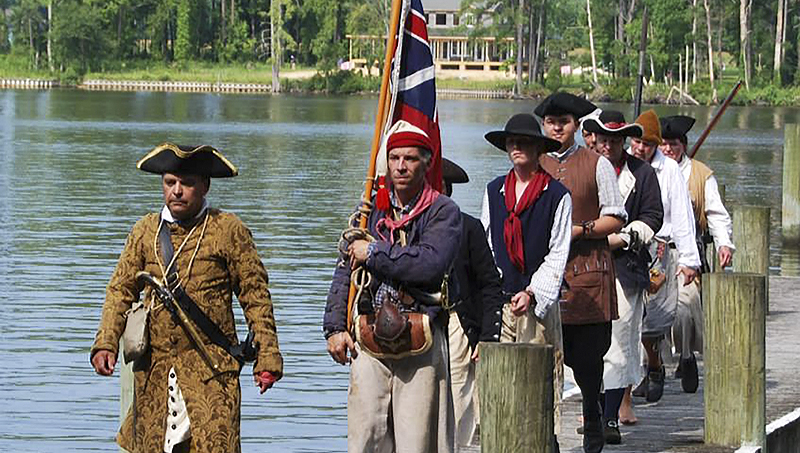 PIRATES ON PARADE: Living historians and interpreters portraying members of the crews of Blackbeard and James Maynard will arrive in Bath next weekend. (Daily News)

BATH — From Stede Bonnet to Blackbeard himself, people have long been fascinated with pirates, which are part of North Carolina history. Who were they? Where did they live? What did they wear? How did they become pirates? Discover pirates as the streets of the town of Bath will be filled with them for the “Pirates in the Port” program beginning at 10 a.m. on July 21.

Historical interpreters will showcase the daily life of pirates and trades of sailors alike. The historical group Crew of the Leviathan will represent Lt. Robert Maynard’s crew and will be camped behind the Palmer Marsh house. These are the sailors that defeated Blackbeard in his final fight to-the-death. The crew of the Florida-based Scavenger will be encamped on Bonner Point, and a colonial trade village will be set up behind the visitor’s center. Visitors may even catch a glimpse of Blackbeard.

“The one thing that makes us a little different as far as our pirate activities compared to somewhere like Beaufort, Virginia Beach or Ocracoke, is that ours is historically based,” Bath Historic Site Manager Chris Umfleet said. “The people we have coming are living historians and interpreters who will be dressing in period clothing. The clothing is mostly handmade using period-style linens and materials, so they will actually be living the life as it was 300 years ago.”

Various demonstrations will take place during the day, with the eventual return of Blackbeard from his encounter with Lt. Maynard… or at least the return of his head (which he lost in the final fight). A 3 p.m. memorial service will remember the dead and dying from Maynard’s crew and include the reading of their recently discovered names. A wreath laying and ceremonial bell ringing and “Eight Bells Final Watch” will be among the activities that take place on the state dock.

“What we will be adding this year is a list of the dead and dying from Maynard’s crew who were brought here from Ocracoke,” Umfleet said. “Within the last two years, there are a number of researchers who have sought out those names specifically for this anniversary event.”

There will be lectures on Blackbeard and Lt. Maynard at 4 p.m. on Friday and 10:30 a.m. on Saturday, examining the seafaring practices of each.

The Palmer Marsh House will be open and tours of the Bonner House will be available upon request. A retrospective exhibit of costumes and memorabilia from Historic Bath’s outdoor drama “Blackbeard: Knight of the Black Flag” will be displayed at new Historic Bath Exhibit Center on Harding Street. Also, the new “History of BBQ in North Carolina” traveling exhibit can be seen at the exhibit center.