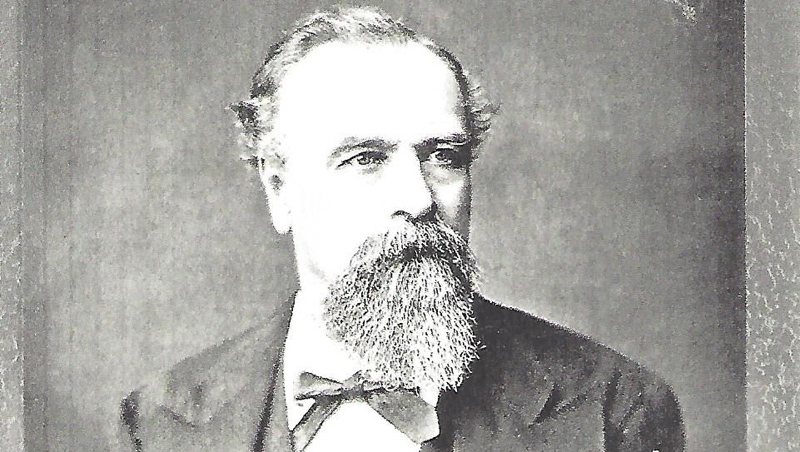 From the Historic Port of Washington

William Henry, Baron von Eberstein was born December 15, 1821 in Saint-Servan, France and died October 25, 1890 in what is now Chocowinity. At different stages in his career, von Eberstein was a seafarer who traveled the world, the proprietor of a general store at Godley’s Crossroads, a school teacher, an artilleryman and ordnance sergeant in the Civil War, a harness maker, and finally a farmer.

The detailed journals he left behind provide rare insight into an uncommon life and an important era on the world stage and in Beaufort County. Fortunately, his family saved his manuscripts. The eminent Beaufort County historian C. Wingate Reed, who was related by marriage, organized them into chapters, and Edward L. Harding of Washington, von Eberstein’s great-great grandson, has more recently compiled other documentation and family photographs.

Though the von Eberstein family originated in Swabia, in southwestern Germany, William was raised in Saint-Servan, on the coast of Brittany, until approximately age 11 when his father died and he returned with his mother to the Isle of Guernsey, an English and French speaking island in the English Channel. On the island, William met illustrious naval officers and seafaring men, who influenced his studies and choice of career.

He attended school until about 14, when he signed on as a midshipman on the Chief, a 2,540-ton trading ship of the British East India Company bound for Calcutta. Although he was promoted to navigator, he resigned after two years and chose instead to hire out his services to other ships. He continued to sail the world into the 1840s, eventually coming to America.

Although von Eberstein was descended from aristocrats, he and his father were both younger sons, meaning they did not inherit any property despite their title of baron. His only inheritance was his education, and every dollar he accrued afterward was through his own labor. He was a sensible man but not immune to risk, and hopped ships in an age when the oceans were highways as young people in modern times hitchhike for adventure.

Von Eberstein manned whalers from New England and made several trips on schooners as mate, navigator, or skipper between New York and Washington between 1846 and 1848. He first arrived in Washington aboard the Dolphin, owned by Thomas DeMille, and later worked for local shipping merchants including S.R. Fowle and Joseph Potts. Von Eberstein apparently chronicled every ship he ever served aboard. On one of his trips, he was to deliver a wedding cake from New York to Miss Olivia Grist, of the local family residing at Elmwood, but got blown off course near Ocracoke to Florida and arrived in Washington two weeks later, when the wedding was held and the cake served.

Baron von Eberstein liked Beaufort County so well that, at the age of 30, he returned with a supply of 20-dollar gold pieces, that he had earned whaling off the Hawaiian Islands, and a plan to go into business. Initially he boarded in Washington, with a Mrs. Gautier near Farrow’s shipyard at the bottom of Bonner Street. Soon, he decided the Chocowinity area offered the best prospects, and he opened a general store at the crossroads, then called Godley’s Crossroads, and set about in search of a wife.

But as a German immigrant born in France, well-educated and mannered, he endured initial suspicion, especially from the mothers of the ladies he tried to court. A false rumor circulated that he had abandoned a wife and family in Germany. However, von Eberstein did eventually prevail and wed Annis Harding, the oldest child of Nathaniel Harding, at Trinity Chapel on April 15, 1851.

The young couple set up housekeeping on 16 acres near the store. On February 6, 1853, their first child, Harriet Elizabeth, was born. By then, von Eberstein had sold the store to his business partner, who never paid him, and was working as a schoolteacher. Around that time, he decided to go back to sea and thereafter contracted, mostly with local merchants, to make short trips to New England and the West Indies.

He allowed his wife and baby daughter to accompany him on his first contract-voyage, which happened to be during hurricane season. During that tumultuous expedition Mrs. von Eberstein became the stoical companion to Mr. von Eberstein, the stalwart man of the sea. Sailors of the era relied on skill and bravery, but also retained a certain fatalism, knowing the outcome of any voyage to be uncertain.

It is doubtful any of von Eberstein’s neighbors ever addressed him as “Baron” as he gradually won them over and built a life for himself in Beaufort County. Despite his unlikely origins, he became a pillar of the community, and when the Civil War came, he gave his adopted home complete loyalty.

­­­­­­­­­­­­­­­­­Billie-Jean E. Mallison is a member of the Historic Port of Washington Project, Inc. Find us at www.hpow.org or on Facebook at HistoricPortofWashingtonMuseum. Thank you to Claudia Dahlen, Reference Specialist/Genealogy, of the North Carolina History Room at Brown Library for assisting with research.