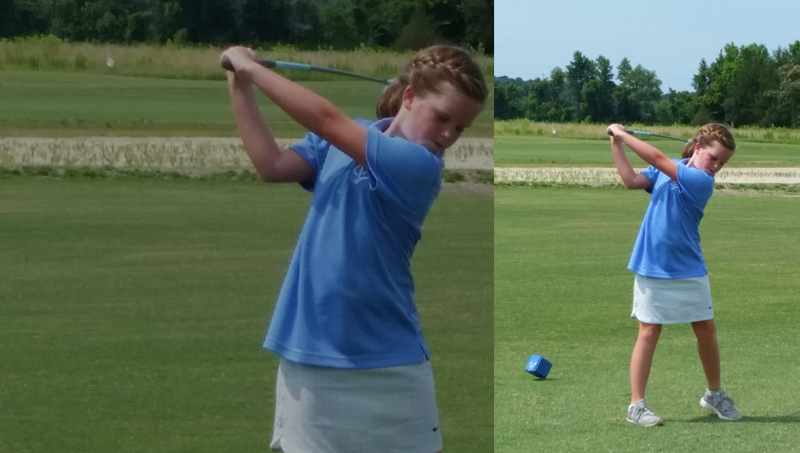 “It was just a tough, tough day. But you know what? That’s part of golf,” coach Peg Bodie said. “The greens there were extremely different than what they’re used to playing on. I think the hardest part of the game yesterday for most of the kids was the putting. But, it was a learning experience and they’ll grow from it and get better for it.”

Along with playing on a tough, unfamiliar course, the WYCC team was hurt by the fact it was missing 19 of its 31 players, who were away at camp. In every league match, along with the points garnered from individuals finishing in the top-four of their age group, each team gains half a point from every signed scorecard turned in, regardless of the score. Bodie’s team no doubt suffered from missing out on 9.5 points.

While the WYCC team couldn’t replicate its success from the week prior when it scored 27.5 points to finish second, there were still individual bright spots. One of the brightest was the play of seven-year-old Ross Moore, who shot a season-best 49 to lead all of WYCC’s players in the 11U division.

“He’s incredible,” Bodie said. “He was shooting 53, 58. And he comes along and shoots a 49 in Brook Valley. That was really kind of special for him.”

Moore wasn’t the only WYCC golfer who shot a season-best score at Brook Valley. Nine-year-old Sally Ross, playing in a competitive match for only the third time ever, shot a 59 on Monday. Bodie credited Ross’ parents for the young golfer’s developing game.

“For her to improve like this is really kind of encouraging, plus she loves the game,” Bodie said. ““It’s amazing. (Sally Ross’s parents are) a huge support to their golfing family. They support Luke (Ross), her brother, who’s done really well too. In golf, it takes a village.”

The WYCC Junior Golf team didn’t have an easy go of it last Monday, but Bodie said its moments like these that her young golfers can really learn from. She said she tells her team they’re going to learn something new every time they play, not just about golf, but about themselves as well.

“The kids know that golf is a game where you’re going to hit more bad shots than good shots,” Bodie said. “It’s how you react to those negative parts of the game that really kind of give you your character. I don’t know if golf really builds character, but it sure does reveal character.”

The WYCC Junior Golf team will wrap up the regular season of the Eastern North Carolina Junior Golf League with on familiar grounds. The Washington Yacht & Country Club will host the season finale this Monday.