River Rats head to knockout round of tournament 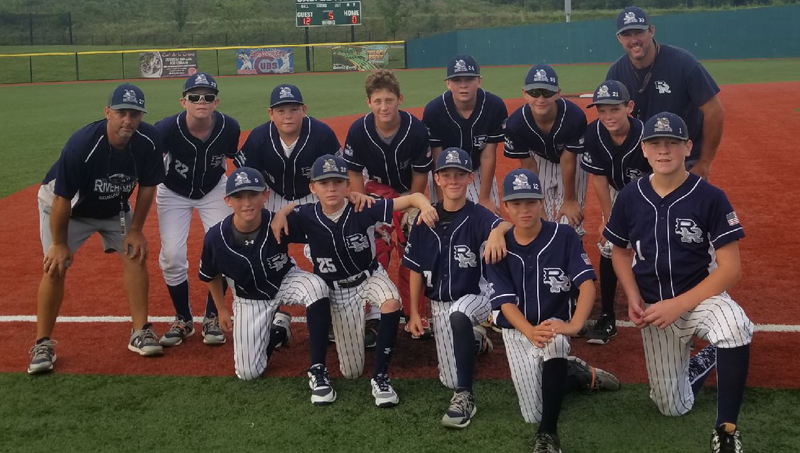 PIGEON FORGE, Tenn. — Taking part in the Gold Rush Experience baseball tournament that’s being held at the Ripken Experience Pigeon Forge, the Washington River Rats 12U travel team wrapped up pool play yesterday with a 3-2 record to clinch a spot in the Gold bracket.

The River Rats began their time in Tennessee on Monday, opening up pool play with a matchup against the Stallions Baseball Club. Washington handedly defeated the Cleveland, Ohio-based team 12-0. Carter Smith earned the win for the River Rats, allowing only two hits and striking out eight Stallion batters in a complete game performance.

While it was a one-man job on the mound for Washington, it was more of a group effort at the plate. Nine River Rats chipped in with at least one RBI and ten registered a base hit. Kole Trull helped lead the way offensively, hitting a game-high three RBI to go along with a triple. Knocking in two runs apiece, Avery Martin and Bryce Williams were the only other players in the game to have multiple RBI.

While Smith was neutralizing the Stallions’ bats, Washington’s offense quickly went to work. Scoring at least two runs in each of the game’s first three innings, the River Rats held an eight-run lead after three innings of play. Washington added four more runs in the fifth, with Trull’s bases-clearing triple supplying most of the runs in the inning.

The River Rats continued their winning ways the next day, winning their second game of pool play 19-10 over the South Lakeland Fury Tuesday morning. Playing as the home team, Washington actually trailed by three runs after the top of the first inning. But the River Rats took control of the game once they had a chance at the plate.

Once again it was Trull making an impact with a bat in his hands. Stepping to the plate in the bottom of the first with the bases loaded, Trull hit an inside-the-park grand slam to give Washington a 4-3 lead it wouldn’t surrender. After shutting out the Fury in the top of the second, Washington followed by scoring eight runs in the bottom of the inning to take full control of the game. A triple each from Hunter Baldree and Carter Smith were the highlights of the inning.

Cohen Ezzell and Trull combined to do enough on the mound to limit the Fury’s bats and pick up the win. Ezzell pitched 2.1 innings, racking up four strikeouts, while Trull fanned four Fury batters during his 1.2 innings of work on the mound.

Playing their third game of pool play Tuesday afternoon, the River Rats tasted defeat for the first time in Pigeon Forge. Washington’s bats finally cooled off after scoring 31 runs through its first two games, as the River Rats lost 8-3 to the Backyard University Gamers.

This time it was the Gamers who jumped out to a big lead, scoring six runs in the opening inning, and Washington could never recover. The River Rats just couldn’t generate any offense, collecting only five base hits in the contest. It wasn’t as if the Gamers were prolific at the plate either, collecting only six hits. But they showed discipline at the plate, drawing eight walks in the contest, with three of those walks resulting in a run scored.

Washington picked up its second loss of pool play yesterday morning, falling to the Blind River Bullfrogs 14-7. Perhaps still in an offensive funk from the night before, the River Rats didn’t score a run until the third and saved a four-run outburst until the fifth inning, but it was too late at that point.

After scoring a run in the bottom of the first, the Bullfrogs proceeded to add to its lead over the course of the next three innings. Four runs in the second, six in the third and an additional four in the fourth made sure the River Rats didn’t have a chance of mounting a comeback.

Having lost two games in a row and unsure if they’d qualify for the tournament’s Gold bracket, the River Rats needed a win to close out pool play yesterday afternoon. And that’s exactly what they did, defeating the Grand Blanc Bobcats 16-10.

But the win was far from an easy thing for Washington. The Bobcats scored six runs in the game’s opening inning and held a 10-6 lead heading into the fourth inning. But it was at that point that the River Rats kicked it into gear.

Washington scored six runs in the fourth to take a 12-10 lead and coasted to a win. The victory was especially important due to the fact a loss would’ve given the River Rats and the Bobcats the same record and a tiebreaker would’ve decided which team qualified for the Gold bracket instead of the Silver bracket.

The knockout round of the tournament starts today and Washington will play in the Gold bracket, facing off against the Diamond Vision Elite.

Kickball tournament helps me feel part of the community