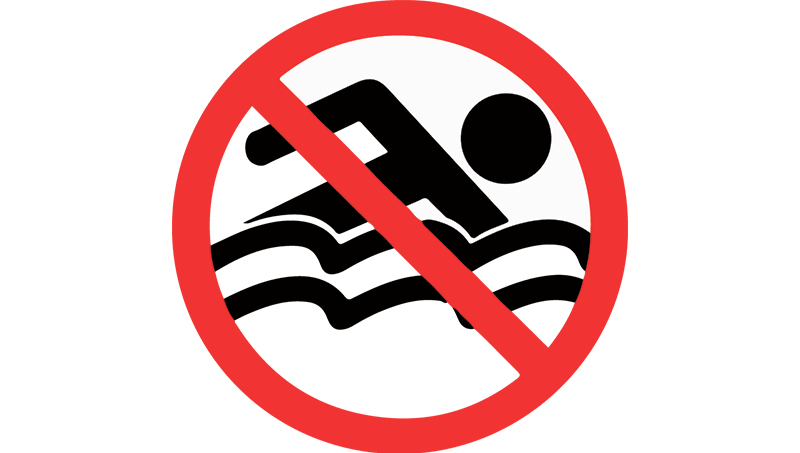 Pungo River at Woodstock Point, Bath Creek at Bonner Point, Broad Creek at Pamlico Plantation, Pamlico River at Swan Point and Trent River at River Bend — all locations known for offering a cool dip to battle the summer heat. They’re also on this week’s list of places where swimmers should think twice about taking that dive.

Sound Rivers’ Swim Guide has issued a swim advisory for these locations, as the results of water sampling returned Friday showed high levels of fecal bacteria. Salt water is tested for Enterococci and fresh water is tested for E. coli and both are found in the intestines of warm-blooded animals, according to a Sound Rivers’ press release. The bacteria can come from a variety of sources: animal feces in runoff from natural or agricultural sites, sewage spills or leaky septic tanks among them. What the presence of such bacteria means for swimmers is a greater risk of gastrointestinal illness or skin infections, but not an absolute risk, according to Pamlico-Tar riverkeeper Forrest English.

“So the way that these standards are developed is they take a very protective approach to public health,” English said. “They’re low thresholds that will be most protective of our health. There’s obviously a chance that you can go swimming, and you’ll be fine.”

“It is usually difficult to attribute a spike of GI illnesses in an area due to poor water quality. Most GI illness goes unreported, and other causes of GI illness, such as food from picnics and norovirus outbreaks at a summer camp, make it problematic to pin down a specific cause,” Madson wrote in an email.

Since Sound Rivers volunteers began collecting water samples in June, 60 percent of those samples have failed the threshold test; 40 percent have passed. Every week, the results are posted on Sound Rivers’ website and sent out via email or text to subscribers. English said, overall, the feedback from the new program has been positive.

“We’ve certainly had a lot of calls of people asking whether water is clean at location X, Y and Z, so that’s been good. … We’re excited to help connect people with their watershed in that way,” he said.

Swim Guide’s purpose is two-fold: to provide information about the water quality of the river and to show people, through actual data, the importance of keeping the river clean.

“The goal is to have clean water that we can swim and fish in, and we need to reflect that in a comprehensive way. This is a good example of why regular monitoring is important to track the health of the watershed, and an important tool to reflect how water quality impacts their lives,” English said. “It’s certainly not our intent to tell people where they can and cannot swim. We’re just trying to give people the information, so they can make their own choices about that.”

To view weekly updates and a map of test sites online, visit soundrivers.org/swimguide. To receive text alerts about local water quality, text SWIM to 33222. The Swim Guide smartphone app can be downloaded from the App Store and Google play.