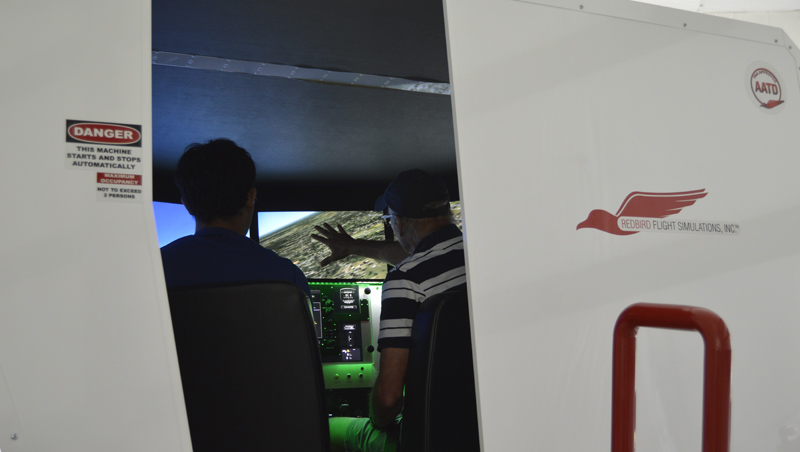 A flick of the wrist and the single engine airplane roars to life. Using the plane’s rudder, the student adjusts for the physical forces that pull on the aircraft. Under the instructor’s guidance, the student pushes the throttle, making the plane accelerate down the runway. Pulling back on the controls, the pilot-in-training and his instructor are soon high in the air, banking in the skies over Greenville after a successful takeoff from Pitt Greenville Airport.

Outside the cockpit, the Redbird FMX Flight Simulator at the Beaufort County Police Activities League gyrates in full motion, perfectly matching the motion of the virtual plane. At the controls, local high school student Jack Hernandez is doing more than just playing a game. He is learning how to fly, accumulating training hours that might one day be used to acquire a pilot license.

“We’re going to give log books and certify their time, so their going to actually get credit for the ground school they are exposed to,” BCPAL President Al Powell said. “We’re following FAA-approved curriculum, but then we’re adding hands-on experiments so the kids can realize exactly what is happening.”

Many of the students participating in the camp are involved in JROTC programs at Washington and Northside High Schools. At Northside, Retired Air Force Lt. Colonel Rodney Gumbish assisted with recruitment. With ample time using the simulator, weather permitting, the experience will culminate with students taking the controls of a real aircraft later this week. 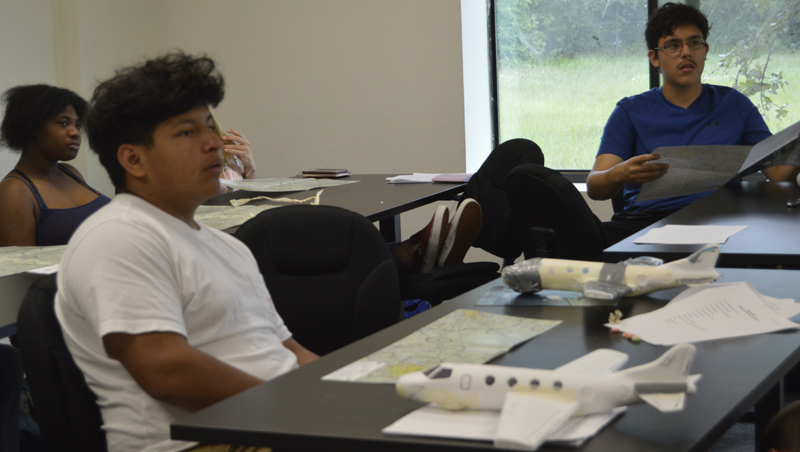 GROUND SCHOOL: In addition to time in the flight simulators, students also received ground school training on topics ranging from aerodynamics to flight planning. Ground school hours logged during the program can be used should students wish to obtain a pilot’s license in the future. (Matt Debnam/Daily News)

While BCPAL has offered a four-week summer program on boating and aviation for middle school students for five years, the high school camp is a new venture for the nonprofit.

“We’re so lucky to have these guys,” Powell said. “Between them, they have over 55 years of flight experience, all military, and then I have another 25 years. All of us have helicopter, fixed-wing and jet experience.”

In addition to summer programs for middle school and high school students, Powell hopes to see BCPAL expand its operations to collaborate with the school system and other groups to help expose young people to career clusters that offer opportunities for careers in Beaufort County.

Operations of BCPAL are funded through a grant from the Burroughs Wellcome Fund. For more information on the Beaufort County Police Activities League, and ways to support the organization, visit www.beaufortpal.org.