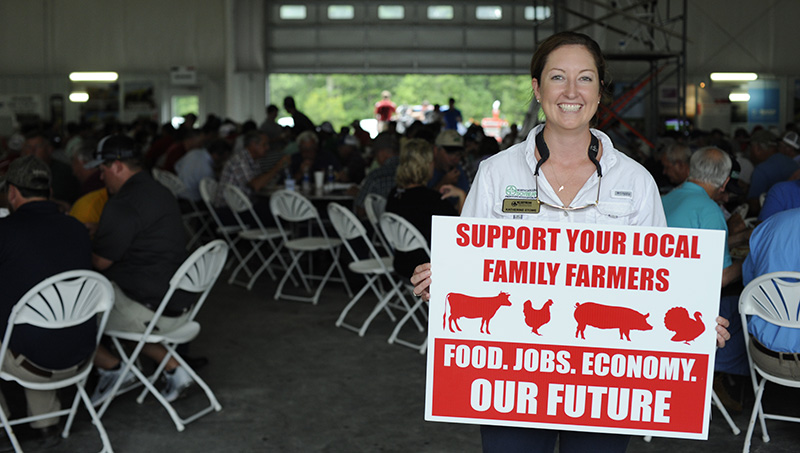 As the price of soybeans fluctuates, local farmers are caught in the crossfire of a U.S.–China trade war.

In June, China enacted a 25-percent tariff on U.S.-produced soybeans. By mid-July, soybean futures plummeted to a nine-year low, from $10.4 to $8.11 per bushel. Since, the price has rebounded to $8.87 per bushel — a number that remains a concern for soybean growers as they head into harvest season.

“Soybeans are our largest acreage in the state, so (it affects) almost every farmer in the state,” said Katherine Stowe, interim CEO of the North Carolina Soybean Producers Association.

Stowe was on hand Wednesday at the Blackland Farm Managers Tour, held at 3B Farms in Pinetown. The annual tour draws hundreds of farmers together to learn about the latest in farming techniques and technology from industry experts.

“Go talk to any of these growers — they’re all concerned. The margins are tight in farming anyway. This could be the difference between feeding your family or not,” Stone said.

Soybeans are used as the base of animal feed worldwide; in the U.S., approximately 200 billion pounds of beans are grown each year. A third of that — around $14 billion annually — is bought by China, but with tariffs imposed on Chinese goods by the U.S., and China’s retaliatory targeting of U.S. agriculture, the impact is being felt by farmers across the U.S.

“The reason (prices) went down is China is now getting soybeans from other places — Brazil, specifically. Thirty percent of soybeans in the U.S. did go to China, so when you lose that, that’s 30 percent of the market. It’s a supply and demand issue, and demand has decreased,” Stowe said.

In North Carolina, the $2 decrease in price per bushel seen mid-July represented a $100 million loss for soybean farmers, an issue being addressed by her organization and others on the national level, according to Stowe.

“We’re definitely sharing the stories of farmers this is directly affecting in D.C.,” Stowe said. “The national organizations are working to develop more markets in other places or increase current markets.”

Among those options are Southeast Asia, Indonesia, Japan and Europe, she said.

“Soybeans will be harvested in the fall from September through December, so we’re hoping the prices will be back up again,” Stowe said. “Growers are hoping they’ll end up with more trade opportunities in the future, but they’re hurting now.”

The sentiment is reflected in the local farming community — that more trade opportunities are necessary to balance the international market.

“It probably should have been done 20 years ago,” said Bradley Boyd, owner of Turnpike Farms in Pantego.

“Ever since China has become a major buyer of U.S. soybeans,” added Doug Boyd, with 3B Farms in Pinetown. “Trump knows what he’s doing, regardless of what anybody says.”

As Doug Boyd explained it, there are only so many soybeans produced every year, so even as China’s demand for U.S. soybeans has decreased, demand has cropped up elsewhere. For example, as Brazil has stepped in to fill the U.S. gap in China’s soybean demand, now U.S. soybeans are being purchased by Brazil to fuel its own bio-diesel industry, he said.

Such expansion of trade opportunities in the future is worth the temporary pain of a trade war aimed at U.S. agriculture, according to these growers.

“This is a short-term solution to allow President Trump time to work on long-term trade deals to benefit agriculture and the entire U.S. economy,” Perdue stated in a USDA press release. “The President promised to have the back of every American farmer and rancher, and he knows the importance of keeping our rural economy strong. Unfortunately, America’s hard-working agricultural producers have been treated unfairly by China’s illegal trading practices and have taken a disproportionate hit when it comes illegal retaliatory tariffs. USDA will not stand by while our hard-working agricultural producers bear the brunt of unfriendly tariffs enacted by foreign nations. The programs we are announcing today help ensure our nation’s agriculture continues to feed the world and innovate to meet the demand.”

According to the USDA website, the agency will use the following programs to assist producers though the Commodity Credit Corporation Charter Act: