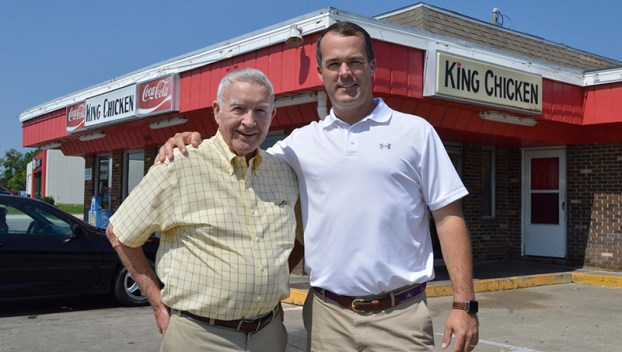 PASSING THE TORCH: Retiring King Chicken owner Granville Lilley, left, leaves behind a 30-year legacy at the restaurant, that followed a 30-year reign by founder Stancil Lilley. The restaurant’s new owner, Zack Mixon, right, hopes to see the restaurant live on for at least 60 more years.

At King Chicken, family tradition has been at the core of six decades of the restaurant’s success. From being owned and operated for 60 years by the Lilley family, to the sense of familial connection felt by the eatery’s employees, the restaurant’s good food is only rivaled by its good people.

This month, after 30 years of success under restaurant owner Granville Lilley, and 30 more before him under his father, Stancil Lilley, the Washington institution that is King Chicken is passing from one Beaufort County family to another.

The new owner, Zack Mixon, is a Beaufort County boy through and through, having grown up on the south side of the river near Chocowinity. He had been looking for a new business venture for the past few years, and when he learned that King Chicken was for sale, he jumped at the chance. As it so happened, he was also just the kind of person Lilley was looking for to take the helm — a family man who would devote himself to the restaurant.

While Mixon has a few ideas of his own to add down the road, the success of the restaurant is a recipe based on three basic ingredients — traditional Southern cooking, hard work and a staff of dedicated employees that make the food on a daily basis.

While the food is what keeps loyal customers coming back to King Chicken on a regular basis, Lilley and Mixon are both quick to acknowledge the most important ingredient of all — some of the best Southern cooks in Beaufort County.

“The employees are the backbone of King Chicken,” Lilley said.

He reflected fondly some of the women who spent their entire adult lives working with him and his father for 30 years or more; ladies like Janie B. Grimes, Ann Woolard, Beverly Grimes and Analene Lilley. One of the restaurant’s longest serving current employees, Carol Satterthwaite, passed the 30-year mark a few years ago, and is a force to be reckoned with in the kitchen, he said.

In terms of management of the restaurant, both Lilley and Mixon share a similar philosophy — the owner of the business has to be a member of the team, investing themselves not just in the financials, but also in the day-to-day operation of the business. In doing so, Lilley says an active owner can build camaraderie among employees on a level that approaches kinship.

“If I wasn’t 81 years old, I would still be doing it,” Lilley laughed.

When Stancil Lilley founded the restaurant in 1958, there were no other businesses on Carolina Avenue. Bill’s Hotdogs is the only restaurant in Washington that can claim greater longevity than King Chicken.

The building that today houses King Chicken held a Texaco service station in the front and a laundromat in the back. Between the two, Lilley decided to open up a hotdog stand. With wild success, he opened the walk-in storefront as it is today.

Today, King Chicken serves hundreds of hungry Washingtonians on a daily basis, and also serves as a meeting place for a wide variety of civic groups, including Washington (noon) Rotary and the Washington Kiwanis Club. The 100-person occupancy dining room is available for large functions and is open to all customers on Fridays as a place to enjoy their meal.

“What we want to do is make sure it’s here another 60 years,” Lilley said. “We have been blessed immensely by King Chicken.”

Board prepared to act on delayed request

Washington’s Planning Board, during its meeting Tuesday, is scheduled to consider a rezoning request and make a recommendation regarding that... read more