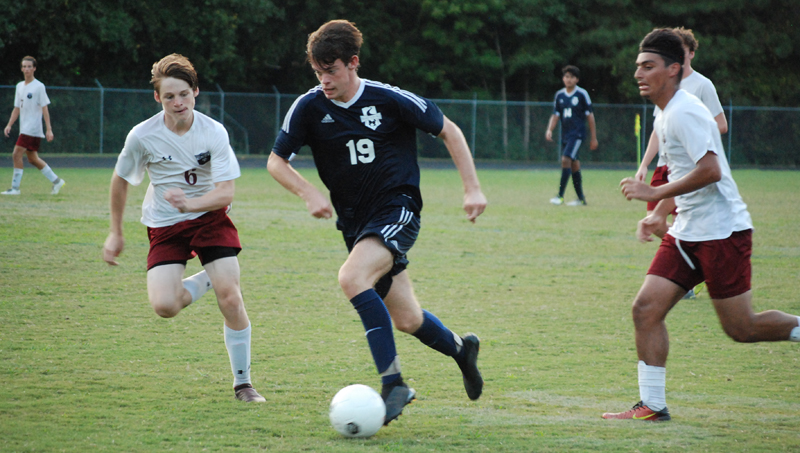 LONE GOAL SCORER: Washington’s Tim Anglim accelerates past two South Central defenders during yesterday’s 4-1 loss. Anglim scored a goal to even the score in the first half, but the Falcons pulled away after the halftime break. (Sean Finnerty | Daily News)

The Washington soccer team played South Central evenly in the first 40 minutes of yesterday’s matchup, but the second half was a different story, as the Falcons scored three unanswered goals to hand the Pam Pack a 4-1 home loss.

“I just thought that we got outplayed. We played a team that was neat and organized, and they just took us out of our comfort zone and shut us down in most aspects of the game tonight,” Washington head coach Jim Kozuch said. “We made some subs in the first half, and I actually really liked the way it looked. I thought it was working great, I thought I found a winning combination. And in the second half our midfield was absolutely nonexistent. I don’t know if we strung together two or three passes. They really did a great job of taking us out of our game.”

The Pam Pack (2-3) actually started out the game as the aggressors, controlling more of the possession and keeping South Central (5-0-1) pinned in its own half of the field. The first chance of the game came from the foot of Washington’s Tim Anglim. The senior midfielder did well to create some space for himself on the left edge of the box and fired a shot, forcing the Falcons’ goalkeeper into a save.

10 minutes into the game South Central showed its ability to counterattack. Forcing a turnover, the Falcons quickly broke down the field, but South Central’s shot was deflected out for a corner. A few minutes later the Falcons opened the game’s scoring.

Washington seemed comfortable in possession of the ball, but a turnover near midfield and a quick through ball put a Falcon on a breakaway. Pam Pack keeper Will Crisp saved the initial shot, but another South Central attacker was there to bury the rebound.

Washington responded almost immediately, thanks to a fantastic solo effort from Anglim. Getting on the ball near midfield, Anglim beat three defenders as he dribbled to the edge of South Central’s box, before he placed a shot far post that froze the Falcon keeper and nestled in the net.

The teams came out of the halftime break tied 1-1, but that didn’t last long, as the Falcons scored in the first minute of the second half. A loose ball dropped to South Central’s Fisher Coleman just outside of Washington’s penalty box and the Falcon ripped a shot that flew past Crisp and into the net.

It was South Central’s turn to control most of possession in the second half, as the Falcons kept Washington pinned back in its own half. Unlike the Pam Pack, South Central added goals to go along with its dominance in possession of the ball. The Falcons put in two goals in the game’s last 20 minutes to close the scoring at 4-1.

Washington will next hit the field next Tuesday when the Pam Pack host West Carteret.