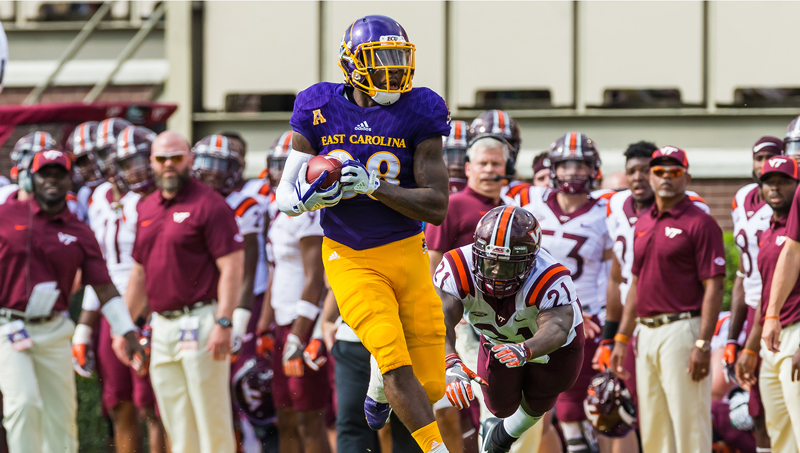 GREENVILLE — Turnovers and poor fourth quarter clock management cost the East Carolina University football team its home opener against North Carolina A&T on Sunday, despite having more yardage and time of possession in a 28-23 loss.

In a game that was rescheduled from Saturday night due to lightning, the extra preparation time for the Pirates worked against them. However, better than recent years, ECU saw more stops on defense, more rushing attempts and improved blocking from the offensive line throughout the game. But horrible clock management in the final two minutes of the game, along with two red zone turnovers within the Aggies’ five-yard line, ultimately doomed the Pirates.

“I am more than disappointed. We had a receiver leave the field on a 2-minute drill, and it’s just no words what happened there in the second half,” ECU head coach Scottie Montgomery said. “We’ve been in two-minute drills too many times and work exactly what we need to do. After a long time of preparation, it’s definitely not the finish we thought we would have.”

Trailing 28-23 with 7:05 remaining in the fourth quarter, ECU was forced to punt after a three-and-out. Uncharacteristic to recent years, the Pirates’ defense forced the Aggies to punt after nearly recovering a stripped ball at A&T’s own two-yard-line, but failed to gain more than five yards in four plays, turning the ball over on downs.

After another quick stop, ECU got the ball back with 2:07 remaining and went to work with no timeouts. With under a minute remaining, and the plays already communicated to quarterback Reid Herring, starting running back Anthony Scott ran the wrong play and forced Herring to scramble up the middle for just a few yards, instead of Scott following the route to the outside to move the chains.

With a successful passing play to the outside, ECU got over midfield, but following the play, wide receiver Deondre Farrier left the field when he was needed for the ensuing play, causing a mad scramble. The scramble took 23 seconds off the clock, and the Pirates just barely got the ball snapped as the clock ran down to one second, with Herring throwing an interception that went through the hands of a receiver in the end zone.

“Deondre Farrier left the football field with fatigue and you’ve just got to understand the situation there. Leroy Henley was on the sideline and he just ran in because he saw him coming to the sideline. It had nothing to do with Leroy. Leroy was trying to help the football team there,” Montgomery said.

After ECU converted its opening drive into a field goal by Jake Verity, Herring, in his first career start, marched the Pirates down the field again into the red zone. However, unfortunately for Herring and the Pirates, he threw behind an open ECU receiver in the end zone, into the arms of Aggie defender Franklin McCain, who then returned the interception 109 yards the other way for a touchdown.

After connecting with redshirt freshman Blake Proehl and Farrier in the second quarter for a 17-7 lead, Herring and the Pirates turned the ball over in the third quarter on the two yard line and didn’t get another shot close to the end zone for the remainder of the game.

The Pirates saw their lead slip away as backup Aggie quarterback Kylil Carter threw two touchdowns on 7-for-9 passing in the second half, and the A&T defense held ECU to six second-half points.

“Offensively, in the second half, we didn’t execute. I thought our quarterback started the game off pretty good, and then down the stretch, we just didn’t execute it,” Montgomery said.

ECU was more in this game then it was in a majority of last season’s games, leading the Aggies in first downs (28 to 15), passing yards (314 compared to 187), total yards, (382 to 269) and time of possession, (33:49 compared to 26:11). Defensive tackle Jalen Price had the best day for the Pirates, recording four tackles (one solo), two quarterback hits and the only sack of the day. Wide receiver Terrell Green paced the offense, as he caught 10 balls for 85 yards.

The Pirates will look to rebound but will have a shortened week as it prepares for its Saturday matinee with another in-state rival: the North Carolina Tar Heels in Greenville.