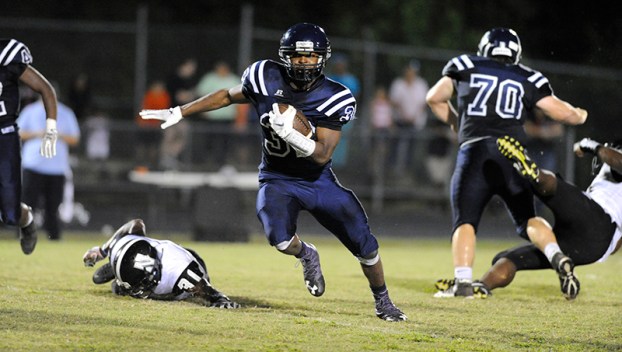 TO THE HOUSE: Washington’s Uriah Lawrence cuts up field after catching a screen pass from Antwone Godley, running 41 yards into the end zone for his second touchdown in the Pam Pack’s 44-0 win over Northside tonight. (Ashley Vansant | Daily News)

Washington takes it to Northside in backyard brawl

In a rivalry game full of chippy play, it was the powerful running of Michael Clark and Ganeryan Parker, combined with untimely Northside turnovers, that led to a 44-0 victory for Washington tonight in the BoCo Backyard Brawl.

“We make it a priority to win the county rivalry games because we want to prove year in and year out that we’re the best team in Beaufort County, so that gets marked on our calendar,” Washington head coach Jon Blank said.

Washington’s (2-2) Clark proved to be too much for Northside (3-1) to handle, as the senior bulldozed his way to 126 rushing yards and three touchdowns. The Pam Pack’s other bruising running back, Parker, chipped in with 94 yards and a score as well.

This was the second game in a row where Clark shined brightly, after he ran for 174 yards and two touchdowns last week against D.H. Conley. Blank said Clark’s success comes from the preparation and work he puts in.

Northside actually started tonight’s game on a strong note, forcing the Pam Pack to punt on its opening drive, thanks in part to a snap that flew over Washington quarterback Antwone Godley’s head. Northside quarterback Johnathan Clark and the Panthers responded by driving down the field to Washington’s 24-yardline.

But that’s when the first of several costly Panthers turnovers occurred, as a handoff to Tyshawn Roberson on an end-around was botched, allowing Washington’s Walt Gerard to jump on the loose ball at Washington’s 37. Washington’s Clark scored the first of his three touchdowns, a 49-yard run, three plays later to give Washington a 7-0 lead with 3:26 remaining in the first quarter.

“We got a stop the first drive and got helped with a snap over the head, and we kind of bowed our neck a little bit. Then we put together a pretty good little drive and just mishandled the handoff, no fault to anybody,” Northside head coach Keith Boyd said. “It just felt like we were getting some momentum going, and all of the sudden they take the ball and they put together something. We didn’t hang our heads or anything, but I think they kind of wore us down as the game went on.”

Northside was forced into a three-and-out its very next possession, and things only got worse on fourth down. A low snap led to Samuel Arias getting tackled with the ball before he could even attempt a punt, giving the Pam Pack the ball at the Northside 23. Washington wasted no time, scoring on the next play with a slant pass to Uriah Lawrence, who made the catch, shed a would-be tackler and ran his way into the end zone with 1:04 left in the opening quarter, making the score 15-0 after a two-point conversion.

The Pam Pack once again made the Panthers pay for the turnover, methodically driving down the field before Clark punched it in from five yards out on fourth and 1, making the score 21-0 with 4:36 remaining in the half. Lawrence pushed Washington’s lead to 29-0 with under a minute left in the first half, running 41 yards to the end zone after catching a screen pass from Godley.

The halftime break didn’t cure Northside’s fumbling woes. The Panthers turned the ball over again on their opening drive of the second half, gifting Washington the ball on Northside’s 40. Parker did much of the heavy lifting, running for 32 yards on the drive, but Clark added the finishing touch, scoring from four yards out with 9:42 remaining in the third. Parker finally found his way into the end zone for a touchdown near the end of the third, rumbling in from two yards out, making the score 44-0 with 1:26 left in the third.

Tempers flared between the two teams as the final seconds wound down, with players from both teams pushing and shoving each other. Despite the bitterness between the players, both head coaches were complimentary of each other post-game.

“They’ve (the Washington coaching staff) done a very good job with their team. Hats off to them; they did a good job and played hard tonight,” Boyd said.

Blank also spoke highly of what Boyd and his staff have done with what is a young and inexperienced squad.

Washington will try to make it two wins in a row when it heads to Bertie next Friday, while Northside hosts former Pam Pack coach Sport Sawyer and Manteo.