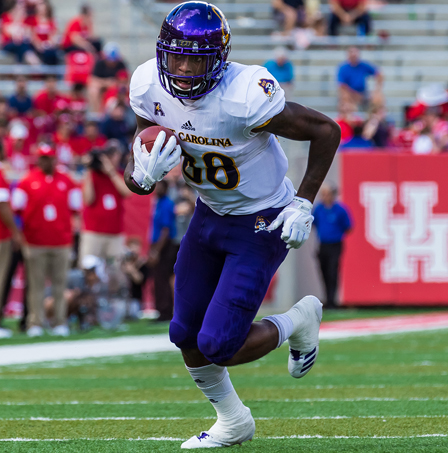 ECU’s strong defensive performance not enough as USF pulls away

TAMPA, Fla. — In a game where the University of South Florida was heavily favored to beat East Carolina University for the eighth time in nine tries, the Pirates dominated its third game of the season in as many tries, yet still fell short, losing 20-13 yesterday after the Bulls scored the go-ahead touchdown with 10 minutes remaining in the game.

ECU also saw itself jump out to an early lead after true freshman quarterback Holton Ahlers was inserted into the game, for the second time this season, and scored a 2-yard touchdown just about four minutes into the game. Ahlers rushed 12 times for 48 yards on the day and completed his first career pass in the contest. He has two games remaining this season in eligibility if the team does indeed redshirt him.

USF tied the game on its second possession with a 2-yard rushing touchdown of its own after marching 68 yards down the field in just over three and a half minutes. However, the Pirates remained in the lead, 7-6, after Alex Turner blocked the extra point.

Early in the second quarter, ECU gave up the first of two huge scoring plays of the night as USF quarterback Blake Barnett threw a 66-yard touchdown to Darnel Salomon in a three-play scoring drive that lasted just 1:03. The Bulls converted this extra point and took a 13-7 lead.

Pirate kicker Jake Verity would make his first of two field goals at the end of the half to cut the Bulls’ lead to three. He tied the score in the third with his second field goal of the contest to send ECU into the fourth quarter even with USF. The Pirates looked to have the momentum completely shifted into their favor as they held the Bulls to just 34 yards in the quarter.

However, in another game in which it dominated this season, ECU showed it’s still learning how to win. On USF’s first drive of the fourth quarter, it took the Bulls just over one minute again to take its second long scoring play of the night to the house. The Bulls racked up 80 of their 115 rushing yards in the game on the fourth quarter score, as Jordan Cronkrite broke free on a rare ECU defensive collapse in the game. In the final seconds before the play took off, two Pirate defenders broke off their normal blocks, expecting a pass play after reading the offensive formation, making a wide-open hole for Cronkrite. Cronkrite is the first player to rush for more than 100 yards against the Pirates this season.

ECU failed to convert a fourth-and-four on the ensuing possession to turn the ball over on downs, and starting quarterback Reid Herring was intercepted on the first play of the Pirates’ final drive to seal the deal for the Bulls later in the quarter. This is the 28th-straight game ECU has dropped when scoring 20 points or less and the third-straight game it has kept its opponents under 30 points.

Washington shut out in conference opener