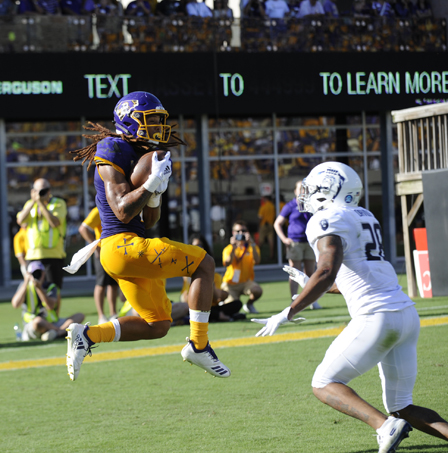 GREENVILLE — East Carolina kicker Jake Verity kicking the game winning field goal with 46 seconds remaining to defeat Old Dominion 37-35 last night may be one of the least exciting things about the contest.

The fourth quarter alone saw 10 possessions, four of which coming with less than four minutes to play. At that point, ODU (1-4, 0-2 Conference USA) held a 35-34 lead after successfully completing a two-point conversion during its last scoring drive, and Verity missing his first extra point of the season after an ODU block in the Pirates’ last scoring drive. ECU (2-2, 0-1 American Athletic Conference) inserted starting quarterback Reid Herring back into the game after benching him for two straight possessions in the fourth quarter. He already had two interceptions on the night, directly leading to 14 points for the Monarchs.

“I was kind of in my emotions about how the game went, I’ve never had something like that happen before,” Herring said. “I feel like everything was taken from me, but they gave me another chance. We went back out there and executed and we won. It was a great feeling to go back out there and help us get the win after I didn’t help it throughout the game.”

On first down, Herring was sacked for an eight-yard loss before throwing an incomplete pass out of bounds. He connected with wide receiver Blake Proehl for 17 yards, but ECU was short a yard on fourth down on its own 28-yard line with 2:30 remaining in the game. It decided to punt and put its defense to work; a defense that was ranked last in all of college football last season. But, that was last year.

Before yesterday, the Pirates had the No. 24 ranked defense in the nation; a 105-spot increase from last year. ECU had all three of its timeouts and would get the ball back if it could hold ODU from getting a first down. It was setting itself up for a shot to march down the field with a struggling quarterback with under two minutes to play and no timeouts.

“With three timeouts there, I’ve studied time management since I was 22 years old and I understand how to win games that are a lot different than the NFL with that two-minute warning versus not having the two-minute warning, the ball not stopping, but in college ball, there’s a lot that you can do with stopping the clock,” Montgomery said. “I thought the defense played really, really well most of the game. I wanted to put it back in their hands.”

The Monarchs started their drive on their own 35 and on first down running back Jeremy Cox rushed for no gain. Timeout Pirates. Then, ODU attempted a pass. An incomplete pass. An incomplete pass that stopped the clock and saved ECU a timeout. Quarterback Blake LaRussa was then sacked on third down for a loss of eight and the Monarchs had to punt after ECU stopped the clock with its second timeout of the half. The most important thing? Only 24 seconds came off the game clock.

With 2:02 to go in the game, the Pirates started their drive on their own 33, and after completing a 12-yard first down pass to wide receiver Trevon Brown, Herring threw three incomplete passes. It was fourth-and-10 from the ECU 45 and the result of the next play would determine the game. Tahj Deans broke free from his defender in the middle of the field and caught an uncontested 16-yard pass to extend the Pirates’ final drive.

“We sent a couple guys deep and he came under. We work on that play a lot in that situation, and there we executed well enough to get the first down,” Herring said.

Two plays later, Herring almost threw away the game, tossing too-short of a pass toward the sideline with no ECU players in sight. To make matters worse, he threw practically into the arms of ODU safety Justice Davila.

“When the ball was in the air I was like ‘Dang. I really hope the game doesn’t end like that.’ I just saw their safety running for the ball, almost like everything stopped, as if it was in slow motion, but thankfully it was out of bounds,” Herring said.

Davila appeared to catch the ball in bounds and get the game-ending interception. However, he was ruled out of bounds, but the play went into review. The replay showed Davila on all angles get a clear foot in bounds, yet, the officials took a long time to make the call. Fans began to boo as each replay was shown on the big screen, and as the head referee walked to midfield, everyone knew what was coming. Until they didn’t.

Davila’s interception was ruled incomplete because there was not enough evidence to overturn the play after he did not obtain full possession of the ball by the time he got his foot down. The Pirates ran two more rushing plays before Verity made the 38-yard field goal.

“This was a big time fourth quarter victory, probably the most gratifying win as a program,” ECU head coach Scottie Montgomery said. “The defense was put into a lot of situations, but we didn’t break. I thought we found a way to win.”

PINETOWN — Costly penalties and an untimely fumble doomed Northside on Homecoming, as the Panthers fell to Manteo tonight, 20-7,... read more