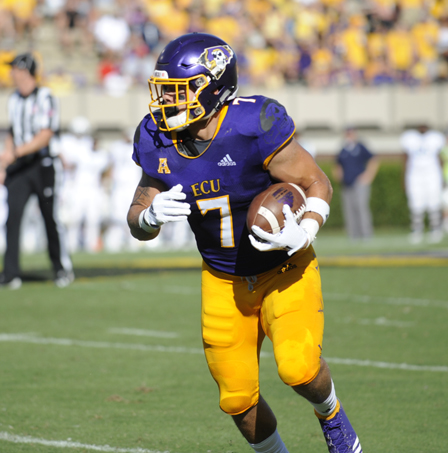 NO ROOM TO RUN: Darius Pinnix heads upfield after catching a pass during the Pirates’ victory over Old Dominion on Sept. 29. Pinnix and the rest of ECU’s running backs were shut down by Temple on Saturday, as the Pirates were limited to 76 yards on 28 carries. (Sean Finnerty | Daily News)

PHILADELPHIA — History repeated itself on Saturday as the East Carolina Pirates lost their fifth-straight contest against the Temple Owls. ECU dropped the game 49-6 after trailing 35-3 at the half, and fell under .500 for the third time this season.

The Pirates (2-3, 0-2 American Athletic Conference) were outrushed and outpassed; an unfamiliar sight for the team this season. ECU rushed for only 76 yards on 28 attempts, and although attempting more passes (38) than Temple (30), the Pirates completed only 18 of them for 120 yards. The Owls (3-3, 2-0 AAC) had 48 rushing attempts and rushed for 173 yards, while passing for 297.

“Offensively, we couldn’t protect the quarterback, which put us in a situation where we’re down two scores. And then you can’t run the ball when you’re three scores down,” ECU head coach Scottie Montgomery said. “Offensively, we’ve got some real things we’ve got to be able to fix on our interior, and we’ve got to fix them really, really quickly. We’ve got to get that corrected.”

ECU cornerback Corey Seargent had an interception early, his second of the year, but the Pirates were unable to convert from third and short and then fourth and 1 to punch it in for the touchdown.

“At the time of the interception, we made a play, but it was one play. But I didn’t like the rhythm of the game right then, because of the way they were driving the ball,” Montgomery said. “They get the ball back, they convert some third downs. They out-coached us and they out-played us in this football game. We’ve got to make sure we understand the importance of every single snap.”

The Owls added two more touchdowns before ECU kicker Jake Verity could get any points on the board for ECU. Running back Ryquell Armstead punched it in from the 1-yard line not even one minute into the second. The following possession the Pirates gave up a 59-yard punt return to go down 28-0 early in the second.

Verity made it 28-3 with 6:30 to play in the half, before Russo found wide receiver Isaiah Wright for a 19-yard score to cap off a 10-play, 75-yard drive to end the scoring in the half.

With the game already out of reach, the Pirates pulled ECU starting QB Reid Herring for the second half. Herring finished the day 17-for-31 for 112 yards. Both No. 2 and No. 3 quarterbacks, Kingsley Ifedi and Holton Ahlers, stepped in during the second half, as each attempted four passes. Combined, the duo went 1-for-7 for eight yards to further show how the Pirates’ day was going.

“Absolutely I’m surprised. We practiced really, really hard last week. We did things the right way and we’re growing as a football program,” Montgomery said. “And when you come on the road and you do things the right way, people are attentive and ready to play, it’s very surprising when you go out and don’t play well. We expected to play extremely well today and we didn’t.”

ECU will bring its 2-3 record back home to face the Houston Cougars (4-1, 1-0 AAC) in primetime Saturday night. Houston has outscored its opponents 201-134 in four games and has scored at least 40 points in each game so far this year.