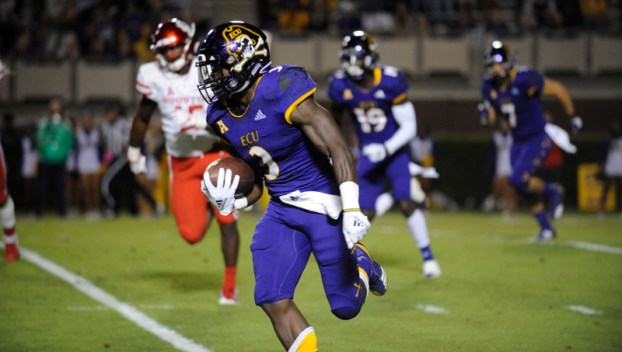 NOT ENOUGH: Anthony Scott tries to get something going for the Pirates with a 30-yard kickoff return after Houston’s first score of the game on Saturday. But ECU didn’t generate much offense until it was already too late, falling to the Cougars, 42-20. (Sean Finnerty | Daily News)

GREENVILLE—Third-string quarterback Holton Ahlers lost his ability to redshirt this season and starting quarterback Reid Herring most likely lost his job in East Carolina’s 42-20 loss at home against Houston Saturday night. The attendance inside Dowdy-Ficklen Stadium was under 30,000 for the first time since 2005, coming in at 29,857.

From the get-go, ECU (2-4, 0-3 American Athletic Conference) could not find a rhythm against an overpowering Houston (5-1, 2-0 AAC) team. However, thanks to Ahlers’ 182 yards in the fourth quarter, the Pirates finished with more passing yards and total yards, against the Cougars. ECU passed for 374 yards to Houston’s 249, with ECU coming out of the game with 415 total yards. Ahlers also lead the Pirates on the ground; he had five rushes for 45 yards, while running backs Darius Pinnix carried 11 times for 15 yards, Anthony Scott had seven rushes for five yards and Hussein Howe rushed twice for zero yards.

“I thought we were really, really poor on first down offensively. I think we have some major, major challenges offensively that we need to address, we have to have some guys make plays,” ECU head coach Scottie Montgomery said. “I thought when we had a chance to make plays early in the game we dropped balls, second portion of the game we had guys open and our protection broke down. The only time we didn’t miss throws was the last two-to-three drives, which is the only positive offensively I think we had.”

However, one player showed it was obvious that he wanted to break the streak of QB struggles in the game. Ahlers took one snap in the first half before playing most the fourth quarter. In a game where ECU’s offense struggled getting multiple first downs on a given drive, Ahlers took over from the Pirates’ 4-yard line and drove them 96 yards in 3:15 to throw the first touchdown of the game for ECU, making the score 42-13. He hit wide receiver Trevon Brown for a 13-yard score after completing hurried and contested throws the entire drive, as well as picking up some of the first downs with his legs.

But, Ahlers wasn’t done. After the ECU defense forced Houston to punt the ball yet again, Ahlers drove ECU 62 yards down the field again for another score. This time it was the freshman’s turn to get in the end zone, scoring on a 1-yard run.

“I thought Holton came in at the end of the game and gave us a tremendous boost; that’s something that will not go unnoticed. After tonight, not very much more (for Ahlers to get more playing time),” Montgomery said. “If you look at the scoreboard it makes it sound like our defense didn’t play well, but I thought our defense played really well at times throughout the game. We (the defense) played well enough, in my opinion, to win on defense. We forced them into punting the ball 10 times and they were four-of-14 on third down conversions. It came down to a complete offense inefficiency.”

The Pirates were poor on offense from the start, opening the game with a went three-and-out. On the other hand, the Cougars wasted little time to get on the scoreboard. Houston needed just 1:54 to score on its first possession, which was capped with a 38-yard touchdown pass from quarterback D’Eriq King to wide receiver Courtney Lark. ECU punted three times in the first quarter, while Houston added another touchdown at the 8:06 mark to make it 14-0. King faked a pass to the back of the end zone, juked two defenders and scampered into the end zone.

With 8:06 left in the second, ECU kicker Jake Verity knocked a 32-yard field goal through the uprights after having his streak of consecutive field goals made broken earlier in the quarter on a 49-yard attempt. Verity hadn’t missed a field goal dating back to the 2017 finale at Memphis.

After Herring’s second interception of the game, the Cougars used four plays in just 29 seconds of game clock to record their third touchdown of the game. A broken coverage play resulted in Romell Brooker being wide open in the middle of the end zone, giving the Cougars a 21-3 lead at the half.

Verity kicked a second field goal in the third quarter, but the Cougars answered with three more touchdowns, putting the game out of reach. Houston wouldn’t score again, making the final score look less lopsided than how the game played out, but the combination of poor QB play until the fourth quarter and no run game doomed the Pirates once again.

After Herring went 26-for-42 for 229 yards with two interceptions, ECU put No. 2 QB Kingsley Ifedi in, but he failed to complete a pass and was tackled for a loss twice in two plays. Montgomery did not play him for another drive in the game.

Next up for ECU is Central Florida (6-0, 3-0 AAC) at home next weekend for Homecoming. The Knights will come to town with a 19-game win streak, the longest in the nation, while the Pirates will be searching for their first conference win of the year.

By ROBERT ROMERO For the Daily News ROBERSONVILLE — The Northside Panthers came into Robersonville tonight hoping to spoil the... read more