Demons fall in season finale, look forward to next year 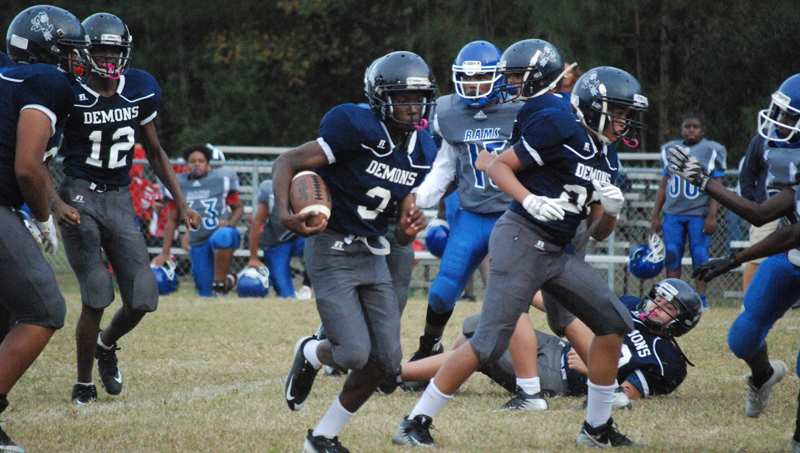 OFF TO THE RACES: P.S. Jones running back Josh Gordon bursts through a running lane carved out by his offensive line during Thursday’s game against Greene County Middle School. The seventh grader scored the Demons’ only touchdown of the game, a 55-yard gallop to open the fourth quarter. (Sean Finnerty | Daily News)

WASHINGTON — The P.S. Jones football team looked to be in the middle of a second-half comeback against Greene County on Thursday after recovering a Rams’ fumble and driving down to the 22. But, disaster struck as the Demons fumbled the ball back and Greene County scored on the very next play, leading to a 22-6 loss for P.S. Jones to close out the season.

The Demons’ comeback attempt started in the third quarter, trailing 16-0. P.S. Jones just saw a drive peter out at the Greene Central 2, and almost surrendered a long scoring run, but Zi’mari Perry made a touchdown-saving tackle. The Rams busted out another 10-yard run but fumbled the ball, with Perry hopping on it for the Demons.

After a bad pitch and a penalty, P.S. Jones faced a fourth-and-26 at the start of the fourth quarter. Needing a spark, Josh Gordon rose to the occasion for the Demons, racing 55 yards to the end zone, making the score 16-6 after a failed two-point conversion. P.S. Jones’ A.J. Provost recovered a Rams’ fumble the very next drive, and runs from Gordon and Perry brought the Demons to the Greene Central 22.

The Demon home crowd was loud and on its feet in anticipation of another score, but was quieted when the Rams took the ball back with a fumble recovery and scored on a 77-yard run on the next play, icing the game with 3:24 left in the fourth.

A big reason why P.S. Jones found itself in a hole at halftime was because Demons’ head coach Elizabeth Dyer benched many of her starters for the opening half due to disciplinary reasons. That decision likely cost her team the game, but its not one Dyer regrets.

“I tell these guys all the time, ‘I’m out to make them better young men and hopefully they’ll learn a little bit of football along the way,” Dyer said. “I’m very strict and I do run a tight ship. I do have a lot of disciplinary actions in place and make sure they stay in line in the classroom and on the field.”

Gordon was one those that sat out the opening half, but he sparked his team upon entering through both words and actions, breaking several long runs, including the touchdown.

“He is actually a very vocal seventh grader and he’s got a lot of leadership. But he was one of the ones that was benched in the first half,” Dyer said. “When he got in, he was ready to play, he was chomping at the bit. And so, he was ready to score a touchdown and get the team hyped up. He usually is one of the ones that gets the team really hyped up, especially when he performs well. And he was on today.”

The loss ended the Demons’ season with an 0-7 record after finishing 7-1 the year prior. Dyer said despite her team’s record, her players learned life lessons along the way, and she was very pleased with her players’ improvement through the course of the season.

This year’s team had several seventh graders at key positions, including Gordon and Perry, and Dyer hopes they will use the disappointment of this season to fuel them in 2019.

“We told them in the locker room after the game to ‘remember this feeling, remember how it feels to be 0-7,’ and that they better not want to ever feel the feeling again,” Dyer said. “So, we hope that they will, and I’ll remind them of that next year, especially in the summer when we start, that they need to channel that feeling so that we are not in the same position as we are this year. 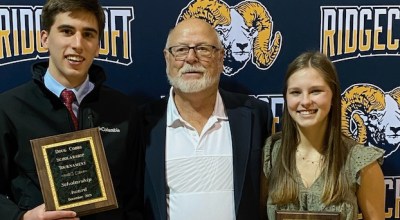 Northside holds out for win on Senior Night