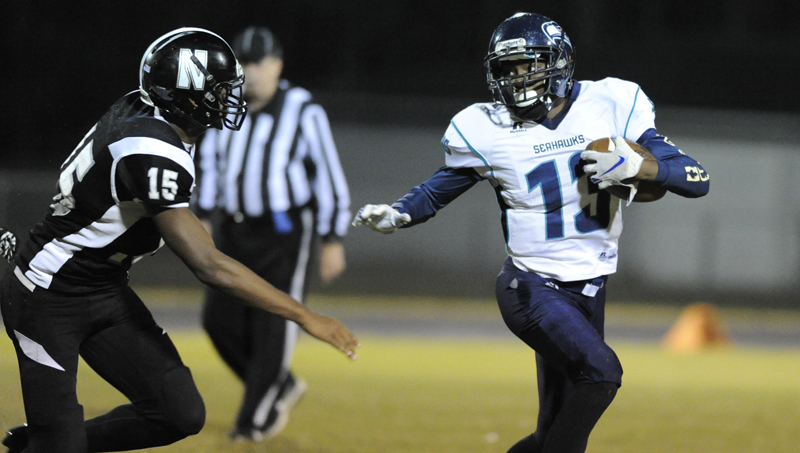 SHUT OUT: Jaheem Carter, the three-TD hero in the Anchor Bowl this past Tuesday, led the Seahawks in rushing tonight with 74 yards, but, along with his teammates, couldn’t find the end zone against South Creek. (Ashley Vansant | Daily News)

CHOCOWINITY — In what was a sluggish defensive battle all game long, the Southside Seahawks fell to the South Creek Cougars 7-0 on their homecoming night.

The first half was a war between the defenses. Both teams fought to the death doing whatever it took to get into the other opponent’s end zone, but were just unable to gain any momentum.

But South Creek (5-4, 2-3 1A Coastal Plains Conference) shifted the energy of the game toward itself when Cougar quarterback Jahkene Clark threw a dime to Zikeyai Cherry on the right sideline, who took it all the way to the end zone past multiple defenders for the first and only score of the game.

The Seahawks (4-6, 2-4 CPC) had multiple chances in the second half to tie the game, or potentially take the lead, forcing a pair of turnovers from the Cougars in their red zone to shift momentum. But a few costly penalties and dropped passes, one specifically in the fourth period by Seahawk Chris Brinkley that could of potentially been a touchdown, halted any chances Southside had of making a comeback.

“We didn’t execute on offense,” Southside head coach Jeff Carrow said. “We had our opportunities and we got into the red zone but we just stalled. Obviously we’re going to give credit to their defense but I feel like a lot of it is on us executing.”

The Cougars also had multiple chances to put to the game away, but couldn’t gain any momentum on their drives in the second half. According to South Creek head coach Will Harrell, the offense has been inconsistent all season long and it doesn’t surprise him that it was unable to get things going.

But the Cougar defense took over the second half, never allowing the Seahawks to convert on third down when they were in great field position to make a run.

“Defensively I thought we played really well,” South Creek head coach Will Harrell said. “But every time we’d get a big play, penalties would just kill us. On offense, we’re like Jekyll and Hyde; you don’t know who’s going to show up. But, if we can just click and bring the same energy the defense gives us, we’ll be good.”

On the bright side for Southside, Seahawk Jonquil Haywood recently returned to the field after dealing with injuries for much of the season and looked very promising in his season debut. He finished the game with 23 rushing yards on seven carries, two tackles (one solo, two assists) and one great 20-yard reception on fourth down in the final quarter.

“It was good seeing him back on the field,” Carrow said. “He’s battled a lot of injuries all year long. He’s getting back close to 100% and seeing him out here offensively and defensively is good morale boost for the team.”

Southside will travel on the road for its final regular season game against North Duplin next Friday night at 7 p.m., where the Seahawks will have to come away with a victory to hang on to hope for a place in the playoffs this year.

Demons fall in season finale, look forward to next…