ECU defense reverts to old ways in loss to Memphis 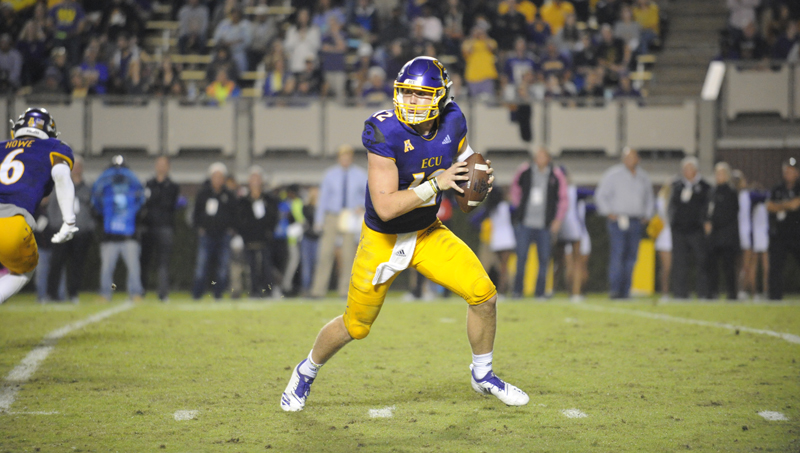 GREENVILLE — For a team which has struggled with offense for most of the season, the East Carolina defense’s inability to stop Memphis’ high-powered offense cost the Pirates the game down the stretch in a 59-41 loss to the Tigers yesterday, despite coming back from a 14-point deficit in the third quarter.

After tying the game at 31 with 8:45 to play in the third, Memphis added 128 rushing yards in the fourth quarter alone to pull away from ECU (2-6, 0-5 American Athletic Conference). The Tigers (5-4, 2-3 AAC) had five second half drives that resulted in touchdowns. compared to three for the ECU, with one coming in garbage time on a fourth-and-goal from the 13 with less than five minutes remaining in the game.

“It’s always frustrating when we know what they’re doing but we can’t really stop it,” defensive back Devon Sutton said. “Today, it was just a matter of everyone needing to their job. There was some miscommunication, some misfits, but we’re going to (have to) get better.”

The Pirate defense got thrashed on the ground as it gave up 277 rushing yards and could not find an answer for Memphis’ workhorse running back Darrell Henderson. Henderson torched holes of all sizes throughout the day, scoring three total TDs (two rushing) and tallying 204 of the Tigers’ 639 yards of total offense on the day. Henderson scored the first TD for Memphis, not even a minute after ECU’s opening possession score, on a 71-yard dump-catch-and-run. Henderson’s speed gashed defenders all day, as he also rushed for 20 and 39-yard scores in the fourth quarter to put the game away.

“Henderson is one of the better players that we’ve seen,” ECU head coach Scottie Montgomery said. “He is definitely a NFL back and they presented problems to us with tackling.”

Memphis utilized its other running backs throughout the day to throw more surprises at ECU and it worked. Henderson’s yardage total came on 21 carries, but the Tigers used three other running backs to amount to 52 rushes in the game. Tony Pollard rushed nine times for 89 yards and two scores, Patrick Taylor rushed 16 times for 59 yards also adding a score and John Williams tacked on a 19-yard rush for a first down.

A pleasant surprise however, was ECU also effectively rushing the ball. In a season where running the ball has seemingly been left up to Pirate quarterback Holton Ahlers, Darius Pinnix, Hussein Howe and Anthony Scott each rushed at least three times and helped ECU get more than 100 rushing yards on the day.

Ahlers, who still finished the game as the Pirates’ leading rusher, ran 17 times for 57 yards, but was held out of the end zone. Instead of giving the ball to Ahlers at the goal line, ECU gave the ball to Pinnix, who had two rushing scores on the day, from 1 and 2 yards out.

However, when ECU would score, it seemed to take no time for Memphis to put more points on the board. After Pinnix’s opening drive score, it took two plays and 43 seconds for the Tigers to respond. In the second quarter when the Pirates went up 14-10 on wide receiver Trevon Brown’s first TD of the day, Memphis responded with a TD of its own less than three minutes later to regain the lead. After kicker Jake Verity hit a career-long 52-yard field goal to end the first half, the Tigers took its first play of the second half to the house on a 75-yard TD pass to wide receiver Damonte Coxie. Coxie ended up finishing with 10 catches on the day for 176 yards and two scores.

ECU pulled within four points at the end of the third quarter on another Verity field goal, but the back-to-back TDs by Henderson to start the fourth quickly gave Memphis a 52-34 lead. Each team tacked on a garbage time score, but an already struggling defense got fully depleted after the two quick back-to-back tallies.

“The momentum (changed). All week during practice we just planned on being energized and everybody making a play, but (on the sideline) we just expect our defense to get that stop,” Trevon Brown said about Memphis breaking the game wide open.

The Pirates once again ran more plays than their opponent, 91-82, and cut down on their turnovers, but still couldn’t put together a full 60 minutes to win a game. With their sixth loss on the season, ECU must now win out in its remaining four games to make a bowl game. Montgomery promised that the team would reach a bowl game this season, but his 2-6 record is pushing him closer to being fired than to the postseason.

“At the end of the day we have to win out regardless, because you don’t want to have a losing record. We might have extra motivation, but I wouldn’t call it pressure because at the end of the day we don’t like losing,” offensive lineman Garrett McGhin said. “You think we’d just play the game to save somebody else’s job? No. This is a test to my name. It’s personal; I’m not worried about Coach Mo, he’s a grown man and has money and is going to be able to take care of his family regardless.”

With a third consecutive season of finishing 3-9 on the horizon, Brown explained how he still plans to be a leader in the locker room and on the field and still has his mind set on reaching a bowl game. This year’s potential 3-9 is different from autumns past to him.

“Last year’s Memphis game we got down early and just gave up. This year, I’m a senior now, I’m not going out like that (how the team played),” Brown said. “I keep the boys up at practice, I keep them energized, because we need every game. We plan on going out to win the game every day, I’ve been in a bowl game, but not too many players on the team have been in a bowl game and I just want to take them there. I want to look back on this moment and say I helped them get there.”

Brown finished with 10 catches on 22 targets for 193 yards and two touchdowns. Ahlers’ got the ball around to ten different receivers on a career-high 62 attempts, as he completed a career-high 34 of them for 449 yards. His 506 total yards and three touchdown passes were also career-highs. Brown and Ahlers will lead the Pirates down to New Orleans for their sixth AAC matchup of the year when they take on Tulane (4-5, 3-2 AAC) next Saturday at 4 p.m. The Green Wave are coming off a 41-15 dominating win over South Florida and are riding a two-game win streak. 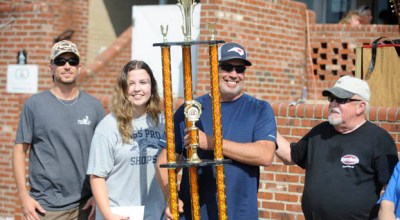