Pirates run away from UConn on Senior Night 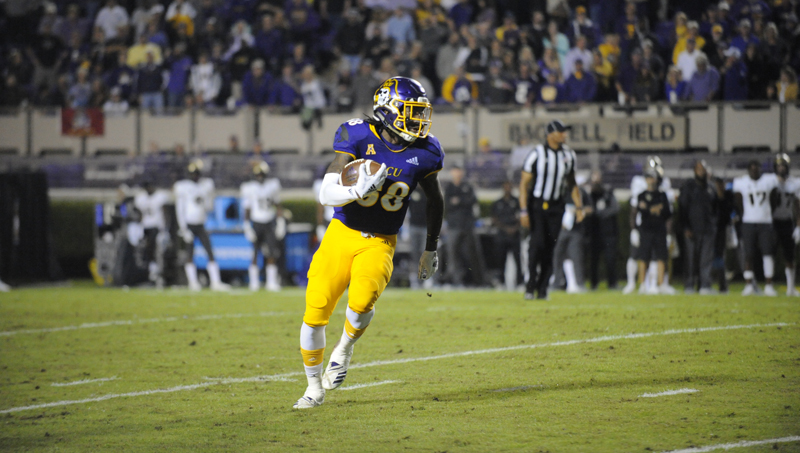 SENIOR NIGHT: Playing for the last time ever at home as a Pirate, Trevon Brown hauled in a 9-yard TD catch to pass Zay Jones for the second most receiving TDs (24) in school history. (Sean Finnerty | Daily News)

GREENVILLE — East Carolina entered Saturday night’s matchup as an 18-point favorite over Connecticut and found that insulting, despite having similar season statistics to the one-win football team this season, and rushed for an astounding 415 yards to ran away from the Huskies en route to a 55-21 victory.

Quarterback Holton Ahlers became the second ECU (3-7, 1-6 American Athletic Conference) quarterback ever to rush for over 100 yards in a single game, joining David Garrard, who accomplished the feat in 2000. Ahlers rushed 12 times for 130 yards while adding a score that saw him take flight and flip over a defender into the end zone to tie the game at 21 in the middle of the second quarter. Joining him in rushing for more than 100 yards was running back Trace Christian, who was used in more of a committee approach in the game, as he rushed 13 times for 102 yards. Christian also made his way into the end zone as he scored the last TD of the game for the Pirates at the beginning of the fourth quarter.

“Run game, it starts there. Guys up front did a great job for me, but any time you can run the ball it’s going to open up passing lanes and I feel like that’s what it did tonight,” Ahlers said. “I came here to follow in footsteps (Garrard’s) and be one of the best to ever play here.”

Darius Pinnix got the start at running back and added 51 yards of his own on six carries before leaving in a boot with an ankle injury. In his absence, the committee approach still occurred, as both backups, Anthony Scott and Hussein Howe, recorded 67 and 55 yards, respectively, on a combined 16 carries. ECU came in averaging 114.1 rushing yards per game this season and nearly quadrupled it against UConn (1-10, 0-7 AAC).

The teams traded touchdowns for three back-and-forth possessions, until the Pirates pulled away, thanks in part to true freshman walk-on Tyler Snead having a career day. Snead lead the Pirates in targets (10) and hauled in six catches for 62 yards, with three of them being TDs. Snead’s scores in the first and second quarter were both fades mirroring one another over his right shoulder that were placed perfectly into the back-right corner of the end zone. He added another TD catch in the third quarter to make it the second consecutive year that an ECU wide receiver scored three TDs against UConn, as Davon Grayson did it in the 2017 matchup.

Senior Trevon Brown, despite not receiving a target until midway through the second quarter, was second on the team in targets (8) at the end of the night and eclipsed the 1,000-yard mark for the second consecutive season. He added a TD on the night as well and passed Zay Jones for the second most TDs in school history.

“When it’s over it’s over, it felt like yesterday I was a freshman,” Brown said. “It felt great (to get that TD on senior night), I’m used to getting a lot of catches and put up a lot of yards, and it didn’t frustrate me tonight (not getting those) because I told coach I just wanted to get in the end zone one last time because the first game I played on this field I scored, and the last game I played on this field I scored.”

The receiving corps added 242 receiving yards on the night to give ECU 657 yards of offense in the game. The Pirate defense turned a back-and-forth battle into a lopsided contest as the defense held the Huskies to 274 yards in the game, while shutting them out in the second half. Xavier Smith also added a key spark to the Pirates’ offense as he had his first two career receptions, for 24 and 27 yards, to move the chains for the Pirates from their own 43 to the UConn 4-yard line. That set up the Ahlers 2-yard TD midway through the second and gave ECU the momentum for the remainder of the game.

On defense, ECU’s Nate Harvey set the AAC record in tackles-for-loss with 24 on the season after he took down UConn QB David Pindell for his third sack of the night. Harvey finished with five total tackles (four solo), along with a forced fumble that the Pirates recovered. ECU was on the winning side of the turnover battle this game (plus-3), as Colby Gore and Damel Hickman each recorded an interception.

“Coach just told me, I didn’t even know,” Harvey said. “It feels good, but I’m just glad I could help my team in any way possible but I’m glad it was in this way.”

Ray Tillman also lead a defensive charge for the Pirates, leading the team with 10 tackles on the day, while also recording half a sack. Devon Sutton added nine tackles, while Cannon Gibbs had seven tackles in their final game at Dowdy-Ficklen Stadium to round out a balanced effort on the defensive front.

“I liked the way our senior leadership helped us on defense. In the second half, we shut them out,” Montgomery said. “Once we adjusted on defense, man… you just forget about how dominant of a performance that was defensively tonight.”

The Pirates picked up their first AAC win and will face a tough task to get a second in a short week away at Cincinnati (9-2, 5-2 AAC) on Friday. UConn will play the final game of its season at home against Temple (7-4, 6-1 AAC) on Saturday.

“It’s probably the first game where we played well on offense, defense and special teams. We put it all together tonight and ran the ball effectively,” Montgomery said. “We worked really hard this week to try to throw a lot of new looks at them and different alignments at them in the run game and it worked.”