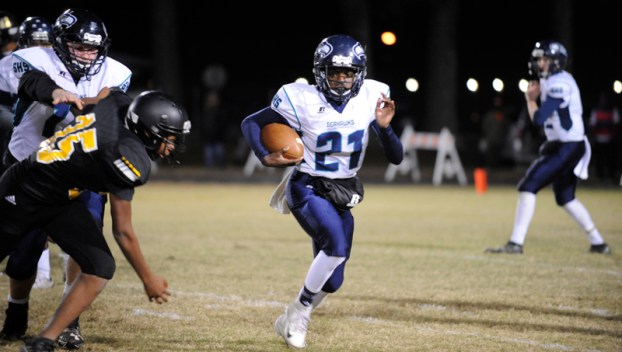 LACKLUSTER: Kenjray Coffield picks up a block on a 9-yard run. The Seahawks couldn’t really get their offense rolling tonight, putting up only 140 yards of offense. (Sean Finnerty | Daily News)

Seahawks blown away by Hurricanes

BAYBORO — Even while missing conference-leading rusher Sayvone Tutt, Pamlico County had plenty of explosive plays in its arsenal tonight, as the Hurricanes scored seven touchdowns against Southside that went at least 41 yards to defeat the Seahawks, 55-6, and end Southside’s season in the second round of the playoffs.

“It’s very frustrating. We preach every year, especially with high-octane offenses, like Pamlico has and Riverside has, we can’t give up the big plays, the splash plays,” Southside head coach Jeff Carrow said. “They took advantage of it tonight. Again, we’ve got to keep the ball and move the ball better. That’ll cut down on some of that.”

The Hurricane offense ran at peak performance tonight, averaging 13.9 yards per play, as Pamlico County put up 416 yards in the contest. It was often boom or bust for the Hurricanes, either breaking out for a long TD or getting stuffed at the line of scrimmage. Unfortunately for the Seahawks, it was more often a TD than not.

Pamlico County wasted little time in getting its playmakers going, as starting quarterback Lamont Murray scored a 45-yard TD on the Hurricanes’ third offensive play of the game. Not wanting to be left out of the highlight reel, William Lovick sprinted 52 yards to the end zone with 1:30 left in the second quarter. La-Monti Lewis opened the third quarter by returning the kickoff 86 yards for a score, making the score 35-6 in favor of Pamlico and things didn’t get easier for Southside.

Murray added a 44-yard score and then tossed a 41-yard TD to Lewis on fourth and 6. Jarqez Jones capped the game’s scoring with a 70-yard TD run with 3:00 remaining in the game.

Things might’ve turned out differently for the Seahawks if not for an untimely turnover. After the Hurricanes’ first score, Southside responded, moving the ball downfield thanks to good runs from Jonquil Haywood and Jaheem Carter. Starting from their own 17, the Seahawks moved down to the Hurricane 30. But disaster struck, as George Jones picked off a Hundley Stallings pass and returned it 77 yards for a TD and 15-0 lead.

“That was huge, huge momentum swing right there,” Carrow said. “If we convert there, then we’re in the ball game all the way through. But hats off to (Pamlico County head) coach (Torrey) Nowell and all. (They) do a good job coaching and scouting up. They did a great job.”

The Seahawks didn’t back down though, forcing Pamlico to punt on its next possession, setting up the Southside offense with great field position at the Hurricane 39. Carter and Hayden Mayo moved the ball down to the goal line, before Stallings plunged into the end zone from a yard out to make the score 15-6.

But that was the closest the Seahawks would make it, as Pamlico’s explosive offense couldn’t be contained, while Southside couldn’t punch the ball and threw another interception that scuttled another drive.

“We thought we had a sold game plan heading in, a few wrinkles and formations offensively. And again, I felt like we moved the ball in between the 20s again; didn’t put it in where we needed to,” Carrow said. “Then we had some key turnovers right there and gave them a lot of momentum. And they fed off of it there.”