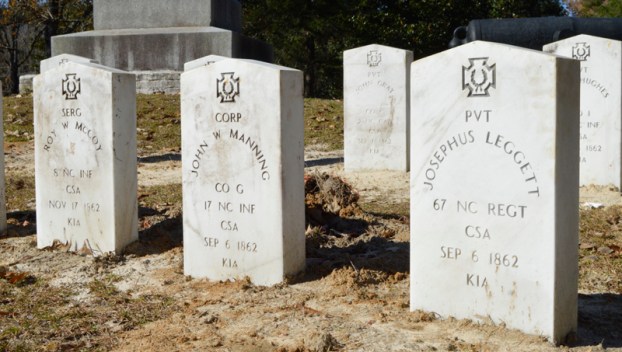 NEW MARKERS: A total of 30 new Veterans Administration grave markers are being installed in Oakdale Cemetery, commemorating the memory of local Confederate soldiers. Many, such as these pictured, were killed during the Siege of Washington on Sept. 6, 1862. (Matt Debnam/Daily News)

A century long-effort to mark the resting place of Beaufort County’s Confederate dead is approaching fruition. At Washington’s Oakdale cemetery, the Sons of Confederate Veterans Beaufort Plowboys Camp 2128 is in the process of erecting 30 new Veterans Administration grave markers in honor of men who fought in regiments from Beaufort County or who died in Beaufort County during the Civil War.

“Back then, most cities, towns and villages had their own militias,” Plowboys Camp Adjutant Ken Maness said. “So when the state, which to them was their government, called them up, they reported.”

A number of the men were Beaufort County boys, serving in regiments known as the “Washington Grays” and the “Beaufort Plowboys,” two names later adopted by local SCV chapters. Others still came from various parts of the state.

Some came from nearby places such as Craven and Washington counties. Others were dispatched from the Piedmont, soldiers from Wake, Chatham, Orange counties and others. Behind each stone and each name, is a unique story and reason for serving in the Confederate military.

For the men of the modern-day Beaufort Plowboys, the effort to mark these men’s final resting place is about honoring those who answered the call of duty to their state and their communities. 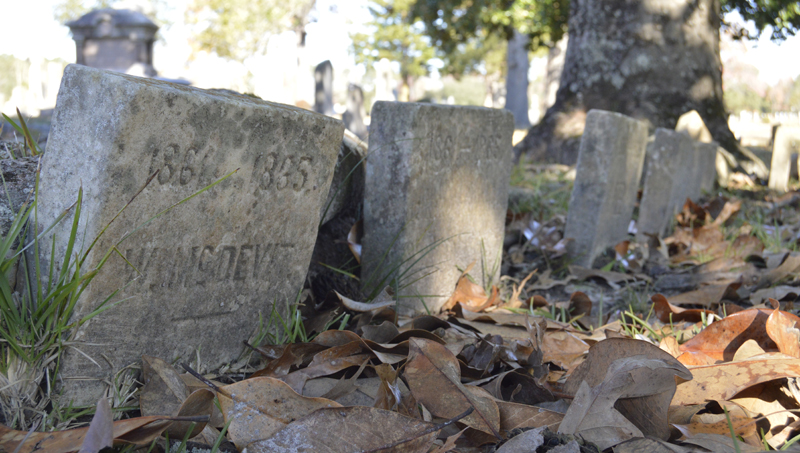 OLD STONES: Stones erected more than a century ago mark the final resting place of Confederate soldiers relocated to Oakdale cemetery from a mass grave on the corner of Fifth and Market streets. (Matt Debnam/Daily News)

“A lot of these names that are on these stones are Beaufort County names,” Maness said. “Those people still have relatives here. Now they’ve got a stone they can go to and say ‘That’s in memory of my great-great-granddaddy.’”

The effort to bring these men to a final resting place, all together, was initiated way back in 1883 by the Ladies Memorial Association of Beaufort County. According to documentation from the United Daughters of the Confederacy, the purpose of the group was “to gather the sacred dust of Confederate soldiers sleeping in the bosom of old Beaufort, and place them side by side, their last muster on earth, within the sacred precincts of the cemetery, o’er shadowed by a suitable monument, erected to their memory.”

It was this group, the Daughters of the Confederacy, and the Children of the Confederacy, Washington Grays Chapter, that moved 17 of the bodies from a mass grave at the corner of Fifth and Market streets to Oakdale Cemetery in 1897. Many of the men share a date of death — Sept. 6, 1863, the date of the famous Siege of Washington. The Confederate monument, as it stands, was rededicated in 1898 after being moved from its original position at the intersection of Water and MacNair streets.

The effort to place new markers was continued by the Washington Grays chapter of the SCV more than a century later. After requesting the stones from the VA and having them delivered, the chapter disbanded and the stones remained in storage for more than a decade. In recent months, the Plowboys have revitalized the efforts and began placing stones at the cemetery.

“The Sons of Confederate Veterans was formed in Columbia Tennessee in 1893 when all the old veterans were dying off,” former Plowboys Adjutant Charlie Williams said. “Our charge was to remember them.”

According to the charter of the SCV, the organization is classified as a 501(c)(3) non-profit veteran’s advocacy group, which condemns all forms of racism and the use of the Confederate Battle flag for any such purpose.

A formal dedication of the memorial grounds will be held on May 10, 2019.

Anyone who has met her knows that Chrislyn Wedderien is generally not the type of person to seek out attention.... read more