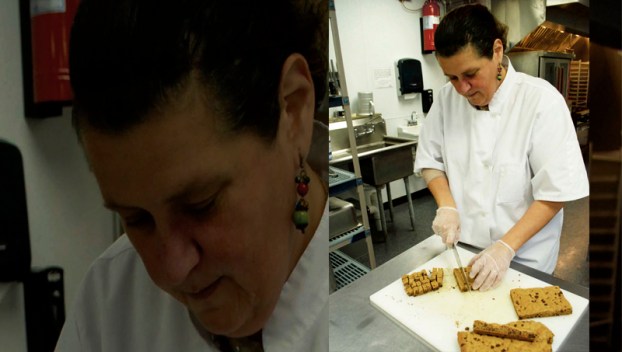 HARD AT WORK: Chrislyn Wedderien has a talent for feeding large amounts of people, as evidenced in the 12,000-plus meals prepared at her restaurant for those in need after Hurricane Florence. Wedderien will serve as this year’s grand marshal in the annual Washington Christmas Parade. (Daily News)

Anyone who has met her knows that Chrislyn Wedderien is generally not the type of person to seek out attention. Rather than basking in the limelight, given the choice, she would rather stick with her true passion — cooking delicious homemade meals, seasoned with love.

It is this same passion, and a desire to serve others, that has brought Wedderien and the staff at Carryout by Chrislyn acclaim throughout eastern North Carolina in recent months. Since Hurricane Florence devastated the region in September, Carryout by Chrislyn has provided 12,881 meals to those in need throughout the state, from storm survivors to first responders.

It is because of this service to the people of Beaufort County and beyond that Wederrien will serve as grand marshal of the annual Washington Christmas parade on Saturday. According to Washington Mayor Mac Hodges, this is the first time in recent memory that the parade has had a grand marshal.

“The main reason is for the outstanding work she did in getting those 12,000-plus hot meals shipped all over the southeastern part of North Carolina,” Hodges said. “She had a bunch of volunteers down there helping them and a lot of them were cooking and bringing food in day after day… She represented Washington really well in stepping up to the plate after Hurricane Florence, and I thought it would be very appropriate to have her as grand marshal.”

For Wedderien, she says that she felt a sense of responsibility to help the community after the storm. With a gift for feeding large amounts of people, she and her staff at Carryout by Chrislyn rose to the challenge, aided by hundreds of local volunteers and financial donations.

“I couldn’t just watch people go hungry and the love and comfort that food truly gives to you,” Wedderien said. “I’m not a person who looks for attention or enjoys it, but I believe that when people ask you to do things, you always say yes, because you become a powerful example for someone else.”

Thinking back on the effort, Wedderien recalls an 87-year-old woman who brought brownies to the restaurant’s back door, doing her part to give comfort to those dealing with the consequences of Florence. That example of kindness and caring was but one of many by those who have supported the effort.

“I think of the hundreds of volunteers who have come into my kitchen to work and volunteer their time,” Wedderien said. “There were people who came in and washed dishes, mixed pasta sauce, swept the floors … This has not been from the center of Chrislyn. I’ve just been the person who’s been able to coordinate it.”

Throughout the process, money raised for the meals has been kept in a separate Gofundme account, allowing the business to maintain a high standard of transparency.

The Washington Christmas parade kicks off at 10 a.m. Saturday morning. Immediately following, the City of Washington will hold a reception at Suites at 158 on Main Street for anyone who would like to drop in and speak with Wedderien and her staff.

Elections boards asked what cost to comply with federal subpoena

The Beaufort County Board of Elections is in a holding pattern as the North Carolina Attorney General’s Office gathers... read more