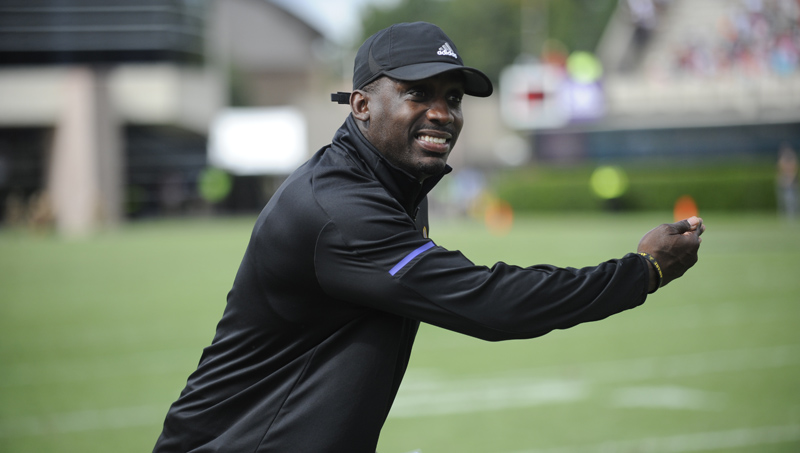 GREENVILLE — East Carolina University Chancellor Cecil P. Staton announced Thursday that head football coach Scottie Montgomery has been relieved of his duties, effective immediately. The decision was made after consultation with the ECU Board of Trustees and special advisor for athletics Dave Hart.

Through mutual agreement by all parties, Montgomery will not coach in ECU’s season finale Saturday at NC State (8-3, 5-3 Atlantic Coast Conference). Defensive coordinator David Blackwell will lead the Pirates (3-8, 1-7 American Athletic Conference) at Carter-Finley Stadium and during the transition, which includes the recruiting period.

“As much as we would have liked the outcome to be different, the progress of a program is ultimately measured by its competitiveness, win total and championships,” Staton said. “It is our decision to move in a different direction with new leadership.

“He cared deeply for his players, was an outstanding mentor, and always focused on the word ‘student’ in student-athlete. We wish him all the best.”

The search for ECU’s new athletics director remains ongoing in earnest, and that individual will finalize the hire for Montgomery’s replacement.

Montgomery compiled a 9-26 (.257) overall record leading the Pirates’ program. He recently completed his third season in American Athletic Conference play with a 4-20 mark, which included a pair of fourth-place East Division standings and a fifth-place finish in 2018 following a 56-6 loss at Cincinnati last Friday.

Appointed as ECU’s 21st head football coach on Dec. 13, 2015, Montgomery previously served a three-year tenure on the Duke staff – the last two as the Blue Devils’ assistant head coach, offensive coordinator and quarterbacks coach. Prior to his second stint in Durham, he spent three seasons as wide receivers coach with the Pittsburgh Steelers after accepting his first collegiate position at his alma mater as receivers coach from 2006 to 2009.

Montgomery had two years left on his contract, which includes a base annual salary of $400,000, plus additional compensation for promotions and broadcast obligations. The buyout clause in his contract is for the base salary only, which is paid exclusively by the athletics department and not with taxpayer dollars.

Staton, the Board of Trustees and Hart will not be in a position to comment until the hiring processes have been completed.