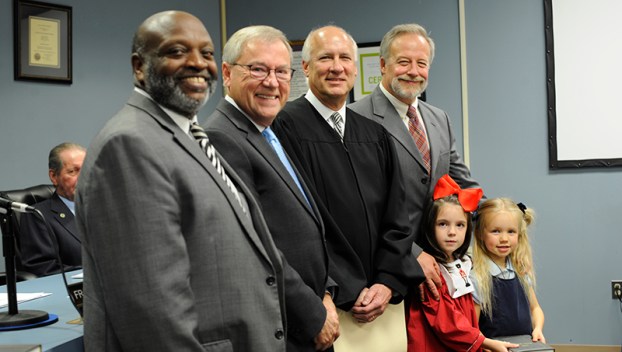 Two returning commissioners and one newly returned commissioner were sworn into office at the Beaufort County Board of Commissioners regular meeting held Monday night at the County Administrative Office in Washington.

Superior Court Judge Wayland Sermons Jr. presided over the ceremony. Incumbent commissioners Ed Booth and Frankie Waters, and Stan Deatherage, who previously served five terms on the board, took their oaths of office in front of an audience that spilled out into the building’s lobby.

A larger space is in the works, as the old First Bank building on West Second Street is currently being renovated to serve as a payment center and the meeting room for commissioners’ monthly meetings.

Commissioner Jerry Evans was voted in as board chairman, and Jerry Langley was elected to serve a second term as vice chairman.

Deatherage was assisted in his return to the board by granddaughters Mira Grace Loughlin and Amelia Susan Deatherage, who held the Bible on which the oath was sworn, while McKinney Waters assisted his grandfather Frankie Waters. Deatherage referred to the event as a mini-civics lesson for his two 5-year-old granddaughters.