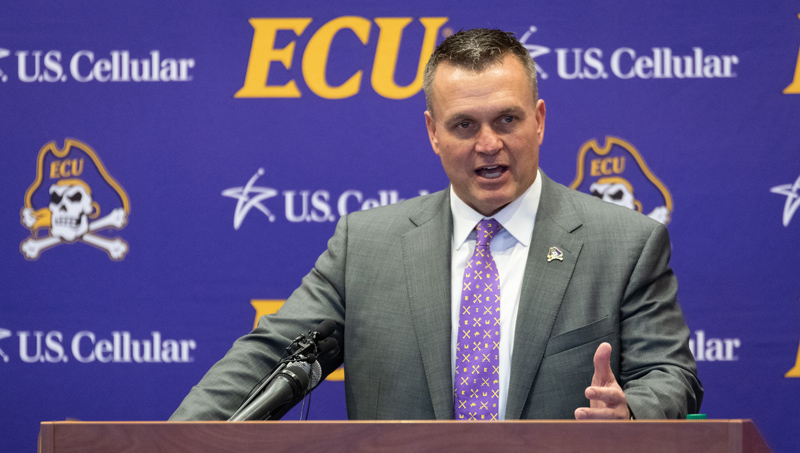 NEW MAN AT THE HELM: New Pirate head football coach Mike Houston spoke of establishing a team identity and living by it year-around, along with embracing a family atmosphere for the Pirates yesterday during the coach’s introductory press conference. (ECU Athletics Media Relations)

GREENVILLE — It was a dawn of a new era for East Carolina football yesterday, as Mike Houston was officially introduced as the Pirates’ 22nd head football coach inside Harvey Hall at the campus’ Murphy Center in front of Chancellor Cecil Staton, new athletic director Jon Gilbert, ECU officials, local media groups and members of the football team.

An almost-eager feeling filled the room from members of various ECU departments and school officials who want to see change: a change in results after three consecutive 3-9 seasons and a change in the atmosphere surrounding the program. Rows and rows of people lined the entire ballroom, with some forced to stand due to the crowd, hoping Houston would deliver a strong message bringing hope in resurrecting a depleted program.

Houston looked almost shy sitting to the right of the newly acquired AD and he turned a soft shade of pink when Staton recited all of his accomplishments in his head coaching tenure. However, that mood quickly subsided once Gilbert called on the Franklin native to take the podium. Houston stood and walked to the podium with confidence, looked directly into the eyes of each person when spoken to and even cracked a few jokes when appropriate.

Houston opened his press conference by thanking Staton, Gilbert and the Board of Trustees for the opportunity and saying ECU is the place he wants to be at. Prior to accepting the Pirates’ head coaching position, Houston was nearly locked in to becoming the next head football coach at the University of North Carolina at Charlotte, but rescinded his name from the offer last Friday after he was contacted by ECU’s special advisor to the athletics program Dave Hart the night before. That opened up the opportunity for ECU to make Houston the Pirates’ next football coach.

Most recently, Houston was the head coach at James Madison University in Virginia for the past three years. Houston lead the Dukes to a 36-7 record, including a postseason appearance in each season, two Colonial Athletic Association Championships and one FCS National Championship in 2017. Prior to his tenure with JMU, Houston was the head coach at The Citadel from 2014-15 and the head coach at NCAA Division II Lenoir-Rhyne from 2011-13. Houston has a cumulative 80-25 record in his three previous head coaching tenures, a track of success he said he plans to continue with the Pirates.

Houston grew up in North Carolina and said throughout his press conference that it’s the state he wanted to come back to and raise his two young sons in. He also spoke of his vision for the ECU football program and what it can become within the state.

Houston continued by explaining the types of schemes he hopes and envisions to bring to the Pirate football program. He acknowledged that the team needed to be versatile when it came to handling the ball and that it needed to be well balanced. Former head coach Scottie Montgomery and offensive coordinator Tony Peterson abandoned the run game for much of ECU’s past football season.

Although carrying four rushers on the squad, none emerged into being a No. 1 option. Montgomery seemed to not trust Anthony Scott, who was named starter at the beginning of the season, and seemed to have a clearer idea just after the midway point of the season. He went with Darius Pinnix as the starter, but Pinnix ended up playing just one half in the only game he started in before leaving the game in a walking boot and being out for the remainder of the year.

Hussein Howe was the only real threat as a passing-down back, but struggled getting much going throughout the season on the ground. True freshman Trace Christian was only inserted on random downs or when games were out of reach. With the struggling rushers, true freshman quarterback Holton Ahlers ended up being the team’s leading rusher despite not becoming the starter until a few games into the year.

Houston also acknowledged the need to continue with a strong defense for the entire season. ECU reached as high as No. 17 nationally in defense this season but got lit up toward the end of the year, giving up 600-plus yards in multiple games. Houston said he wants to run multiple defensive schemes in 4-2-5’s and 3-4’s.

He also said he wanted to play aggressively and go toe-to-toe with teams not just in the American Athletic Conference, but with every team the Pirates face. In doing so, the defense will need to be aggressive in playing a combination of zone, man and quarter coverage. He also said he wants changes in the special teams and wants to mirror those defensive mentalities.

“At the end of the day, what I just described to you is very similar to a lot of programs around the country and a lot of programs in the AAC. I’m a firm believer that it’s not what you do; it’s how you do it. So, our mentality and our mindset will be more important than the schemes we use,” Houston said.

Houston spoke about the importance of continuing to recruit around eastern North Carolina, despite the fans wanting the team to try and branch out in finding bigger name players. He brought up how important team culture and the proper mindset are to him, and has been throughout his programs, and thinks the continuation of “close-to-home” recruitment is still as important as ever.

“Our fan base is centered around Eastern North Carolina. So, I think number one, the more that we can attract the top players in the eastern part of the state to ECU, the stronger and more loyal our fan base will be, so I think that’s very, very important,” Houston said. “The next thing is building an identity in this region. Not just Eastern North Carolina, but in the Carolinas and Virginia. Building an identity, we need to have a starting point so that’s our starting point.”

Houston said he is going to begin recruiting as early as tomorrow and already has this weekend scheduled for multiple visits. He stressed that he is going to be very open and honest with players he has on his team now, as well as players wanting to play for the program. He said he plans to tell student athletes straight up how he thinks they would be used in the program, how good of a fit they’d be and realistic approximations of just how much a student athlete will play. He doesn’t want players to simply be on his roster as backups, but instead, players who can play at a similar, if not sometimes better, level to anyone who would have to miss a game.

“We have a group that’s committed already (and) we’ve been evaluating those committed student-athletes. We are going to work with them first,” Houston said. “We’ve got an official visit planned for this weekend. We are also going to try to pursue non-committed players in the region that are at the ability level that we feel like can help us win championships. One thing with recruiting is that we are going to be very straightforward and honest with our recruits. They are going to know exactly where we stand with them, individually, at all times. That will start with our interactions this weekend.”

Houston had the opportunity to meet with the football team prior to his official press conference because he felt it was important to lay out his plans of how he wants to work with them to them first. His open communication and trust starts with his honesty and he felt as though the football team deserved to know his expectations.

Houston will begin his official recruitment period today and will immediately be involved in the offseason and spring season football workouts. The transition from his successful head coaching stints shift to Greenville as of today and he plans to bring a product that is nothing short of successful to once again fill the seats inside Dowdy-Ficklen Stadium.