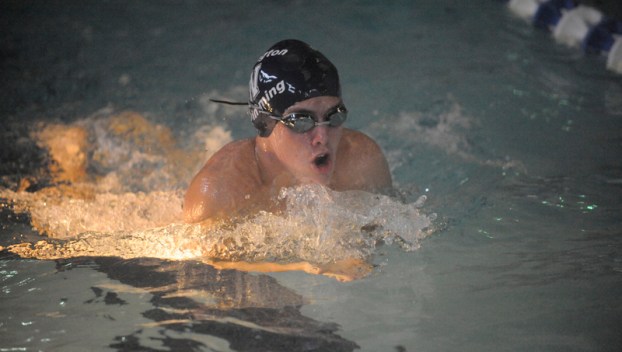 WASHINGTON — Having lost 15 swimmers from last season, but with 10 freshmen added to the ranks, the Washington swim team entered the season’s first meet on Saturday a bit light on experience, as well as lacking some practice time due to Hurricane Florence.

Despite these bumps in the road, both the boys and girls Pam Pack swim teams opened the season with second-place finishes, coming behind only Swansboro’s squads in a meet Washington hosted.

“Overall, I’m very proud of how both the boys and girls teams performed on Saturday,” Washington head coach Kaitlyn Richards said. “Due to Hurricane Florence, we faced a lot of setbacks and these kids have worked hard to improve and learn despite our challenges that we have faced this season. I’m eager to see their growth throughout the year.”

The boys Pam Pack team scored 111 points, behind only Swansboro’s score of 138, with Northside coming in third with eight points. The Lady Pack finished with 89 points, with Swansboro scoring 150 to take first. Southside and Northside finished tied for third, with 12 points apiece.

Richards is entering her second year as Washington’s swim coach and said the experience she has gained has helped her better prepare her team. Having a young team this year, Richards said she wants her swimmers to focus on technique and improving themselves, and not so much on results.

“Our team is young, Richards said. “I always try to remind them that it isn’t always about the points, but what is important is improving your times, making goals, and reaching them through hard work. We have been focusing heavily on technique and polishing the skills that they already have now. A lot of our swimmers this year are new, so we have also been learning different strokes. In particular, I want them to work on their competitiveness now that we have our first meet under our belts. It’s time to grow and improve times.”

WASHINGTON — The Washington boys basketball team had to wait until the 13th game of the season last year to... read more