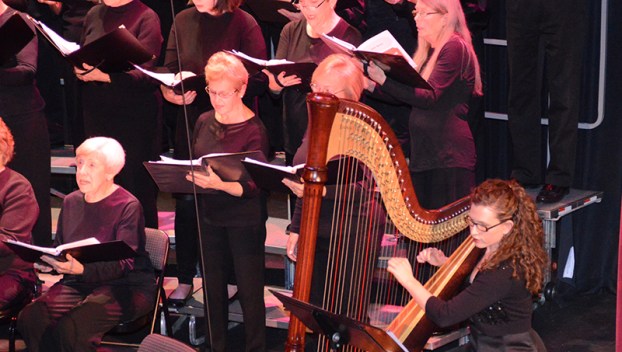 A CHRISTMAS BLESSING: The Beaufort County Choral Society performs a past Christmas concert at the Arts of the Pamlico’s Turnage Theatre. BCCS will perform its annual Christmas concerts Friday night at the Turnage Theatre and Sunday afternoon at St. Thomas Episcopal Church in Bath. Both performances are free and open to the public. (Jim Hackney)

Choral society members unite in love of song and season

The Beaufort County Choral Society will bring Christmas Blessings to the Turnage Theatre stage on Friday night and host a repeat performance at St. Thomas Episcopal Church in Bath on Sunday.

The all-volunteer choral group performs two concerts a year, one in the spring and an annual Christmas concert. All concerts are free and open to the public. And the performers themselves represent a cross-section of the public.

“I love to sing, and there was a member of our church that was in the choral society, and she was telling me about, and I said, ‘Can I go? Can anybody go?’” said BCCS singer Mollie McGhee. “I just showed up and I was in.”

McGhee said the group’s purpose is two-fold: allowing singers to express themselves artistically, and exposing the general public to choral music.

“This gives people a chance to hear choral groups. A lot of the school programs now — they used to have music in their schools, but now children aren’t being exposed to this type of singing anymore. … This puts people back in touch with this choral type of music.”

While McGhee has lived in Beaufort County since 1977, she just joined the choral society three years ago. With joining came a lot of new friends and some other benefits.

She describes “Christmas Blessings” as a more traditional Christmas concert, with music that’s easy to sing along with: “Infant Holy, Infant Lowly,” “Little Drummer Boy,” “Do You Hear What I Hear?” are a few of the selections, in addition to Mozart’s “Fa La La.”

“It’s more that familiar, traditional-type music this year,” McGhee said. “Most of it is familiar tunes that everybody has heard.”

McGhee encouraged people to attend the weekend concerts and, if of the mind to sing, join the choral society. Choral society members pay dues in order to pay conductor Stephen Brand and the group’s accompanists.

Friday night’s concert will be held at the Turnage Theatre at 7 p.m.; doors open at 6:30 p.m. Sunday, “Christmas Blessings” will be performed at 3 p.m. at St. Thomas Episcopal Church in Bath.