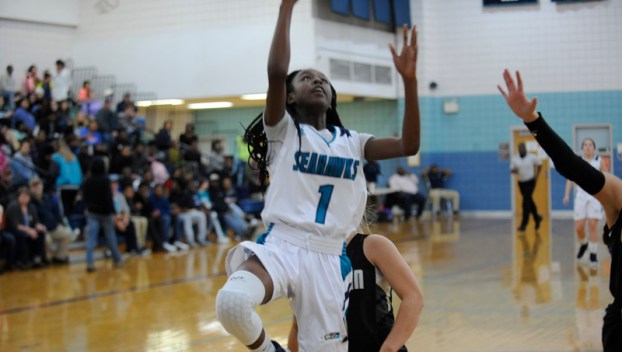 FIRST OF MANY: Freshman guard Jasmine Blango goes up for a layup on Friday. Playing in her first career high school game, Blango led the Seahawks with 10 points and looked to be their best offensive player. (Sean Finnerty | Daily News)

CHOCOWINITY — Just finally playing its first game of the season with a roster comprised of two juniors and the rest underclassmen, the Southside girls basketball team looked like a team lacking experience and needing to get in game shape on Friday night, falling at home to Croatan, 70-26.

“We weren’t in game shape, not making any excuse there. We’ve still got to do the fundamental things, like boxing out, playing defense without fouling — we had too many fouls — and taking care of the basketball,” Southside head coach Milton Ruffin said. “So, we’ve got a long ways to go. Hopefully, we’ll get our legs under us so we can play some good basketball.”

Southside (0-1 1A Coastal Plains Conference) actually started out strong and led in the opening minutes of the game. Led by junior Shantel Cannon, the Seahawks utilized a full-court press to create turnovers leading to easy baskets. Cannon used her speed to come up with a couple of steals, finishing with three. Croatan (3-0 1A Coastal 8 Conference) tried its hand at pressing early on too, but the Seahawks were able to pass their way out.

But Cannon got into foul trouble early, forcing her to go to the bench with 3:35 left in the first quarter, where she remained for the rest of the half. Southside abandoned the press with Cannon out and the Cougars took advantage. It was at that point when Croatan took the game over, building a 34-25 lead at halftime.

Ruffin acknowledged losing Cannon for much of the first half hurt his team.

“That kind of took us out of sync when we lost her (Cannon),” Ruffin said. “She’s pretty much our defensive stopper. She’s the team captain and everybody follows her lead.”

With the team captain on the bench, it gave more freedom to a younger Seahawk. Playing in her first high school game, Southside freshman Jasmine Blango was the Seahawks’ sole threat on offense, using her dribbling to get to the basket. Blango led all Southside players with 10 points on the night. Laquisha Woolard added five points for the Seahawks, while Zarie Cobb scored four points, Tyaunna Trye had 3, and Sarah Petty and Delaney Ayers each had two.

But the Seahawks didn’t have enough firepower to keep up with Croatan, as the Cougars scored kept pouring it on, scoring 38 points in the second half, while the Seahawks managed 13 points for themselves.

The Seahawks play their second game of the season tomorrow, when they host Columbia (2-1 1A Atlantic 5 Conference) at 6 p.m.