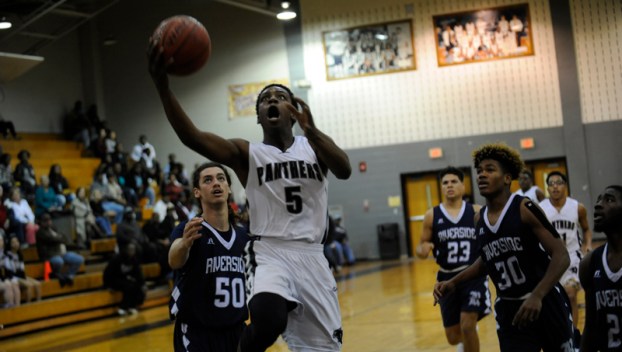 LEADING SCORER: Johnathan Clark finishes off a fastbreak with a layup during Tuesday’s win over Riverside, finishing with a game-high 29 points. (Sean Finnerty | Daily News)

PINETOWN — Having held a double-digit lead since late in the second quarter and pushing it to 14 points early in the fourth, the Northside boys basketball team looked set to coast to its first conference win of the season on Tuesday. But the crowd at Northside was treated to a thrilling final quarter, as the Panthers held off a furious rally from Riverside to come away with an 86-79 victory, without star guard Rashod Smith, who fouled out with five minutes remaining in the game.

Northside (4-1, 1-0 1A Coastal Plains Conference) head coach Jared Adams was particularly pleased with how his players responded after Smith picked up his fifth foul with 5:16 remaining the fourth period and the Panthers holding a 64-54 lead over Riverside (1-2, 1-1 1A CPC).

“We had a lot of guys coming off the bench stepping up,” Adams said. “We were motivated, we stuck to the game plan trying to spread the ball around, cutting, setting good picks and taking quality shots. Not trying to force a shot there towards the end and really executing in the final seconds of the game. We had a lot of guys playing out of position, due to some kids on the team being sick. But, like I said, they passed the torch and they stepped up when the opportunity was given to them.”

The Knights amped up the pressure after Smith’s exit, cutting into the Panthers’ lead. Riverside’s 6-foot-4 freshman Avion Pinner dunked on a fast break to bring a roar out of the visiting fans, and the Knights followed with a quick basket to make the score 67-64 with 3:45 left in the game.

But thanks to Zach Green and Johnathan Clark, Northside managed to hold on. Green showed he has ice running through his veins, hitting seven straight free throws in the final minutes of the game as the Riverside fans attempted to taunt him, finishing with 12 points on the night. Clark, who had a game-high 29 points, scored six points in the final quarter and helped keep his team calm during Riverside’s rally attempt and maintained possession of the ball, dribbling out of pressure as the Knights attempted to hound him into a turnover. 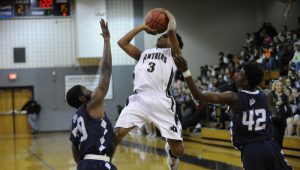 HANGTIME: Rashod Smith hangs in the air to get a shot off against Riverside on Tuesday.

Riverside came out the stronger of the two teams, building a lead as large as nine points with a minute left in the opening quarter when Jay Leavelle buried a 3-pointer after the Knights utilized their height to grab an offensive rebound. Due to its superior height, Riverside hauled down its fair share of offensive rebounds, but the Panthers used their quickness and active hands to come away with steals.

Thanks to Clark and Smith, Northside stormed back in the second period and outscored the Knights, 12-2, in the final two minutes of the quarter to head into the halftime break with a 47-36 lead. The Panther duo took turns handling the ball, as Riverside couldn’t prevent either from driving to the basket. Clark hit three 3-pointers in the second and scored 13 points overall in the quarter. Smith relentlessly attacked the basket, earning him several trips to the line, while also hitting a 3 and scoring some acrobatic layups on the way to scoring 14 points in the quarter and 25 in the game.

With their ability to both handle the ball as a point guard, Adams said it helps lessen the load on both Smith and Clark.

“It allows both of them to take role of the court and they can, I wouldn’t say take a rest, but it takes the weight off of your shoulders when you know you can rely on somebody else to bring the ball up the floor and it’s not solely relied on you,” Adams said. “They’re a dual threat; they play well together, they’re excellent to coach. Just two quality athletes.”

Also chipping on the offensive side were Tyler Turner with his nine points, Carter Boyd who hit a pair of 3-pointers for six points, Kenneth Winfield’s three points from an and-one layup during Riverside’s late rally and B.J. Paniagua, who scored two points on a put-back late in the fourth.

Northside returns to the court tomorrow with a tough test on the road against Farmville Central (8-0 2A Eastern Plains Conference). Tipoff is set for 7:30 p.m.

ROUNDUP: Lady Pack come away with conference-opening win as others struggle