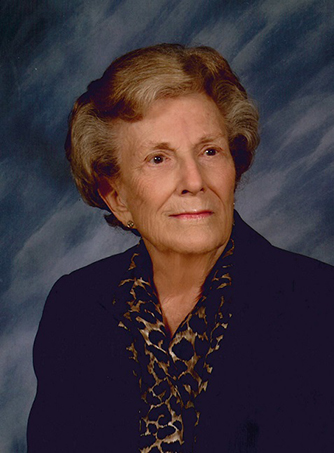 Rosemarie Wilson Edwards, 90, a resident of 212 Riverside Drive, Washington, passed away peacefully with family by her side on Sunday, Dec. 9, 2018. A graveside celebration of her life will take place at Oakdale Cemetery on Saturday, Dec. 15, 2018, at 1 p.m. with the Rev. Ken Hall officiating. The family will receive friends on Friday, Dec. 14, 2018, from 5 p.m. until 7 p.m. inside Wesley Hall at First United Methodist Church in Washington and at other times at the homes of her children.

Mrs. Edwards was born on Feb. 8, 1928, in Bradenton, Florida. She was the middle of three children born to the late Maude Parry Wilson and Leo Hughes Wilson. She graduated from Bradenton High School in 1945 at the age of 17 and enrolled at Duke University, where her brother was attending medical school. While at Duke, she was a member of the Alpha Delta Pi sorority where she served as Treasurer and President. It was also at her beloved university that she met her husband, Dr. Zeno Lester Edwards, Jr. She graduated from Duke University in 1949 and married “Big Zeno” later that same year on Sept. 3. She and Zeno then moved to Baltimore, Maryland, while he attended dental school. While in Baltimore, she worked with the foster care division of Social Services.

Following dental school, she and Zeno returned to Washington where he began his dental practice with his father. Together, they raised four children at their home in Washington Park, which remained “home base” for the family up until her death.

In 2014, N.C. State Auditor Beth Wood recognized Mrs. Edwards as the first president of the Beaufort County Democratic Women in 1970. She was a member of the Addisco Book Club for 57 years and a member of First United Methodist Church in Washington. While Zeno was a member of the N.C. General Assembly, Rosemarie served as Treasurer of the Sir Walter Raleigh Cabinet. She was also a recipient of the prestigious Paul Harris Fellow through the foundation of Rotary International.

In addition to her parents and husband of 61 years, Mrs. Edwards was preceded in death by her brother, Dr. Leo Hughes Wilson, Jr., of Sarasota, Florida, and a nephew, English DesChamps, IV, of Bradenton, Florida.

The family wishes to thank her many caregivers as well as Community Hospice, with a special thanks to Jennifer Walters.

Paul Funeral Home & Crematory of Washington is honored to serve the Edwards family.